December 17, 2013--Found these non-scary cuties (buttons and witch applique) while at Britex in San Francisco, CA, to place onto Halloween Treat.  Now to decide whether or not to have this project framed or simply backed with fabric and an easel.

August 23, 2013--This little bit of scariness is done.  Love the ghost and bargello sections.  Now to find the most frightening buttons possible to place in three of the areas filled with scotch stitches.  If the best buttons have shanks, I can cut them off with wire cutters and secure them to the canvas with stitches around small parts of the design.  Would love to find a little, dangly skeleton. 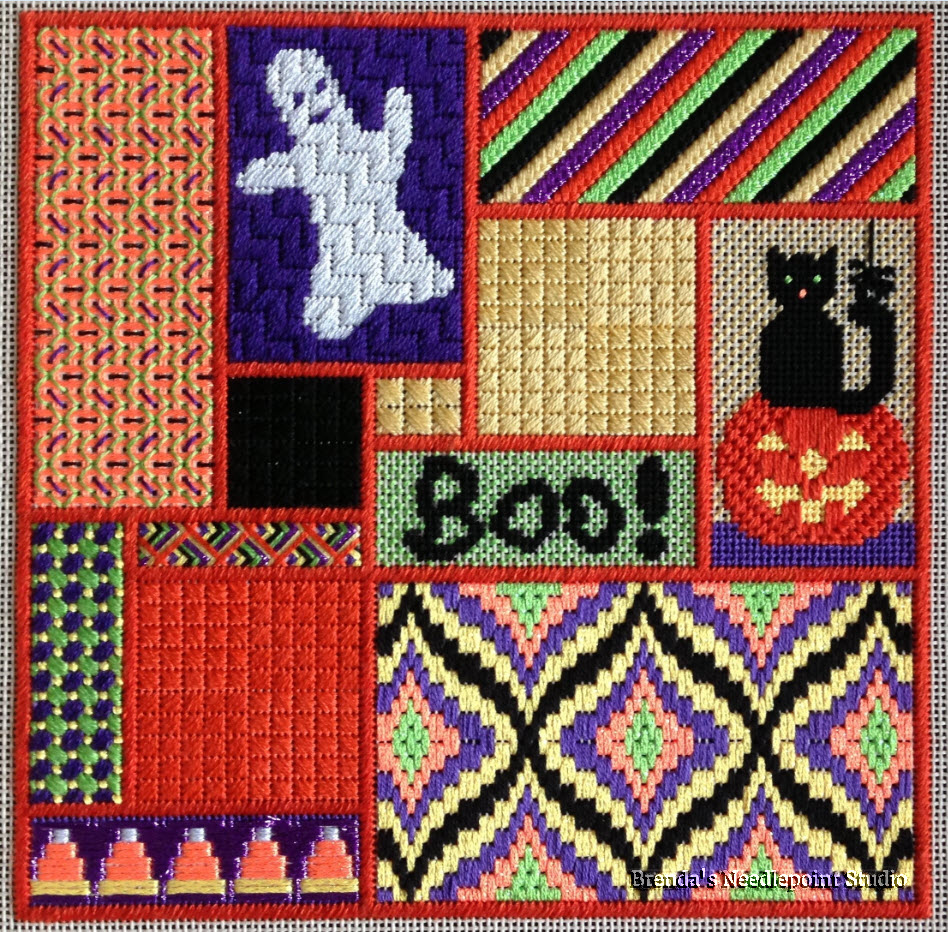 August 17, 2013--Started working on this delightful Halloween Treat after our ANG chapter met on Monday and went over all of the sections.  Thank you RJ for a wonderful job in highlighting areas which will require some attention.  We started with Area 2 shown below.  It's unfortunate the camera doesn't pick up the shine of the RG Petite Sparkle Rays used for the ghost.  It looks like he's shimmering right up to you out of the background.

July 8, 2013--Delaware's Seashore Chapter of ANG is doing Marilyn Owen's Halloween Treat, taken from the most recent Chapter Project Book.  Before we can have our class at the August meeting, we were assigned prestitching of the outline.  Had to concentrate on my stitching at each intersection--the gobelin stitches are over two except at the intersections where some were over 3 (avoiding a lot of over one compensation).   Looking forward to getting this completed in time for Halloween. 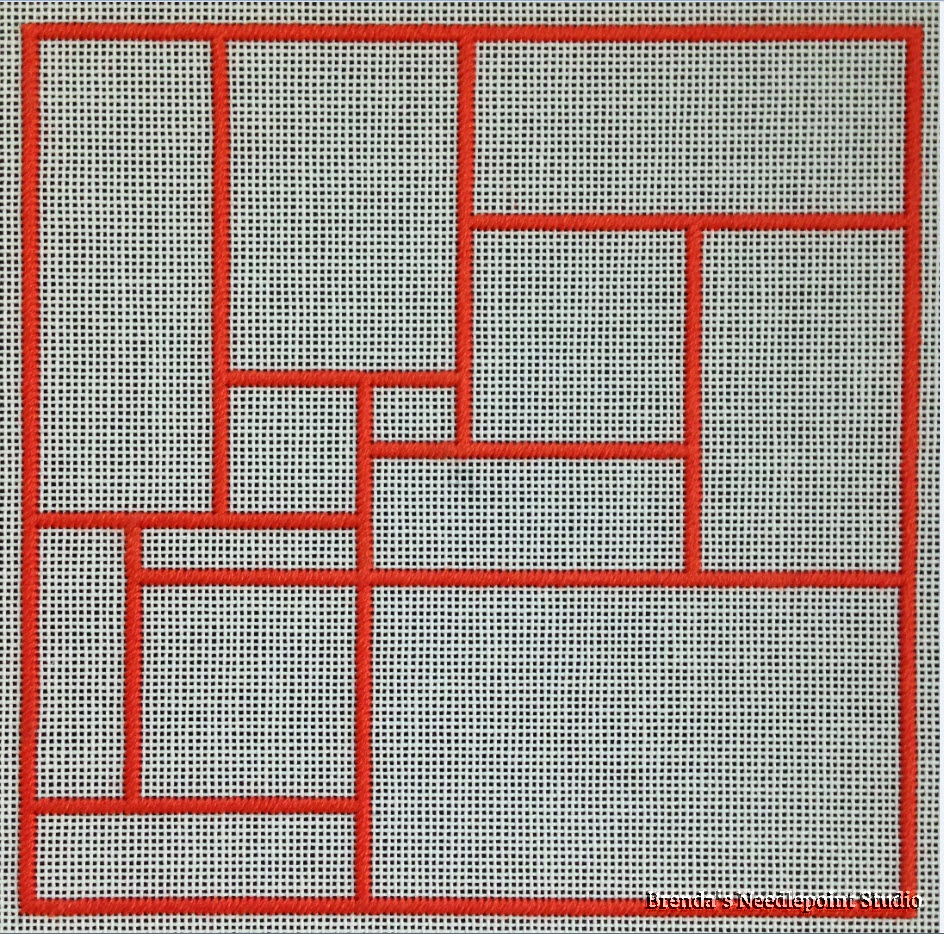 December 14, 2013--Just purchased the instructions for Laura J Perin Designs Holiday Wreath.  Her blog just announced it's availability and what a beautiful project.  Don't know when I'll be able to begin working on this, but will plan for sometime next year.

December 10, 2013--Below are pictures of the finished results.  Made two ornaments--one for me to practice finishing techniques and the second for the ANG Delaware's Seashore Chapter Holiday Lunch and Ornament Exchange on December 9th.  This was the first time "stuffing" an ornament and I found it much easier than glueing canvas and fabric around poster board.  I hand stitched the trim along the edges, but next time will try using my brand new glue gun to attach trim.  A fun project all-in-all.


October 1, 2013--Have begun stitching Liz Morrow's Bargello Ribbons Ornament published in Needlepoint Now magazine, September/October, 2013 issue.  This will be part of Delaware's Seashore Chapter's Holiday Ornament Exchange in December, so pictures of the finished project will not be posted until after the exchange.  But I can show the colors I've chosen below.   The RG Patina, Renaissance Green, was a table favor at the 2012 ANG Seminar Banquet and it is beautiful in this project.  The blue/green Kreinik found in my stash is called Peacock, a perfect match for the green Threadworx Floss. 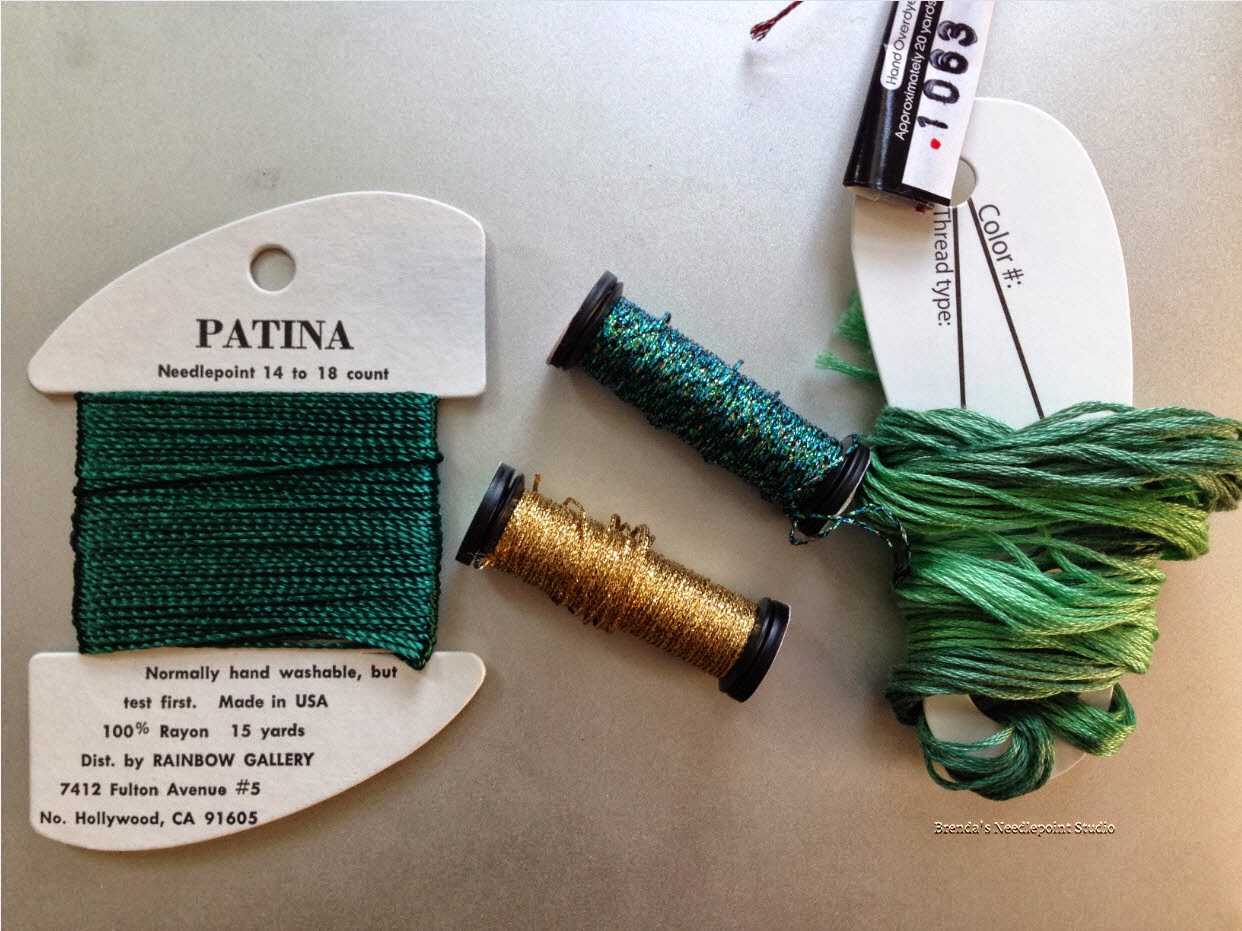 Paper  Gift Box Tutorial
(My Holiday Gift to You) 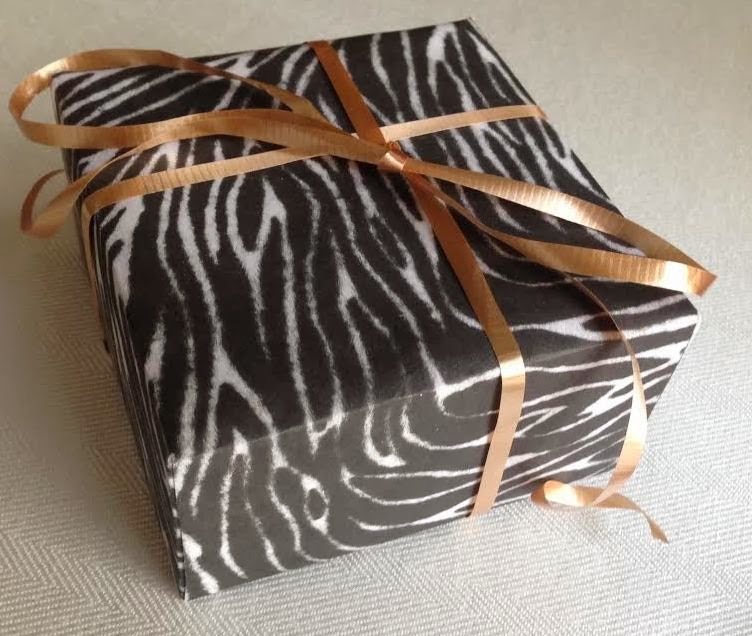 December 7, 2013--The instructions below are for making a paper gift box, top and bottom.  These little boxes are wonderful for holiday ornaments, etc. and can be made out of festive papers (thick type).

1.  You’ll need 2 equal size pieces of scrabbooking paper, scissors, pencil and a long ruler.  Remove ¼” from 2 sides of the sheet you want to use for the box bottom.  The rest of the instructions are the same for both the box top and bottom. 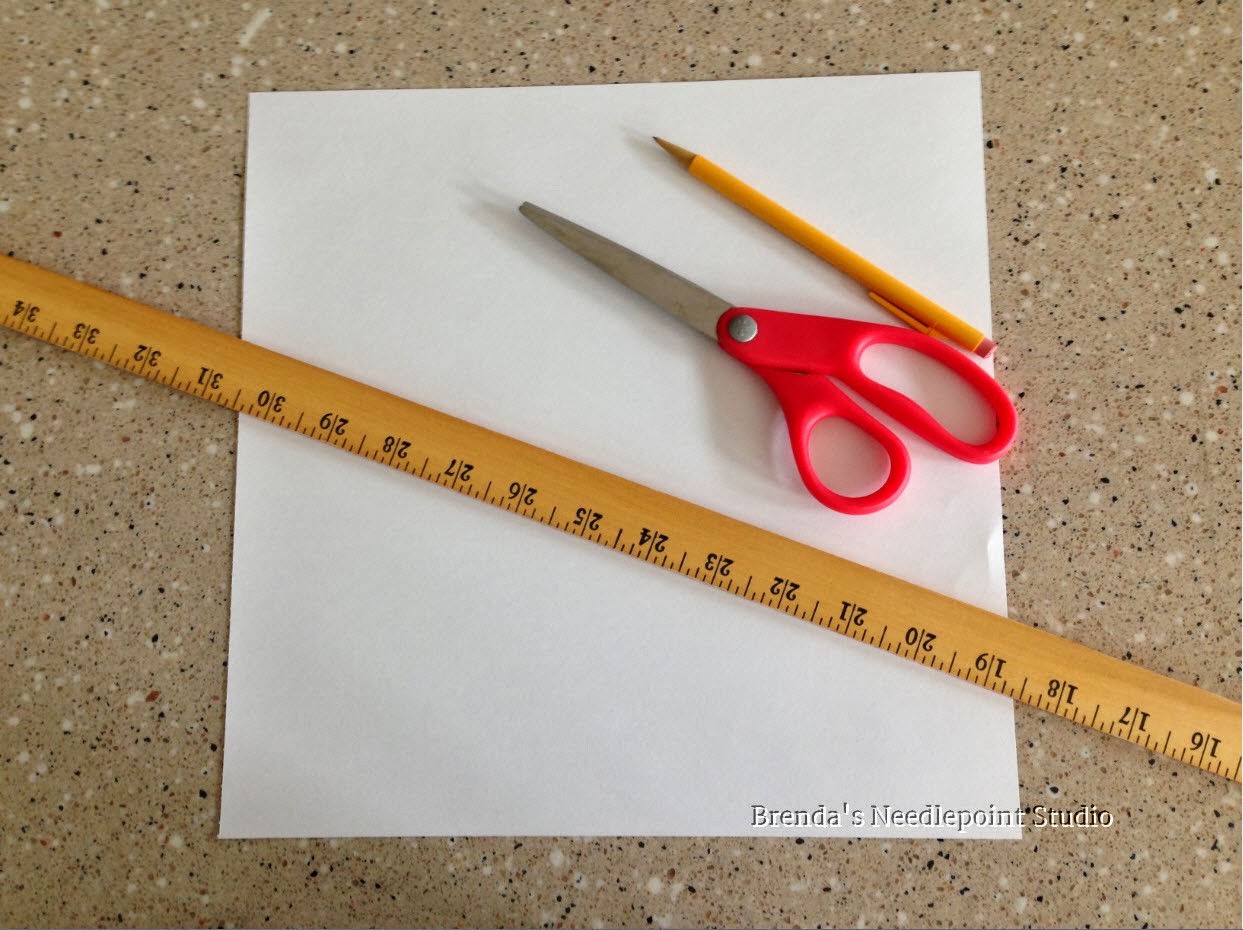 2.  Draw 2 lines from corner to corner, intersecting at the middle.  Be as accurate as possible. 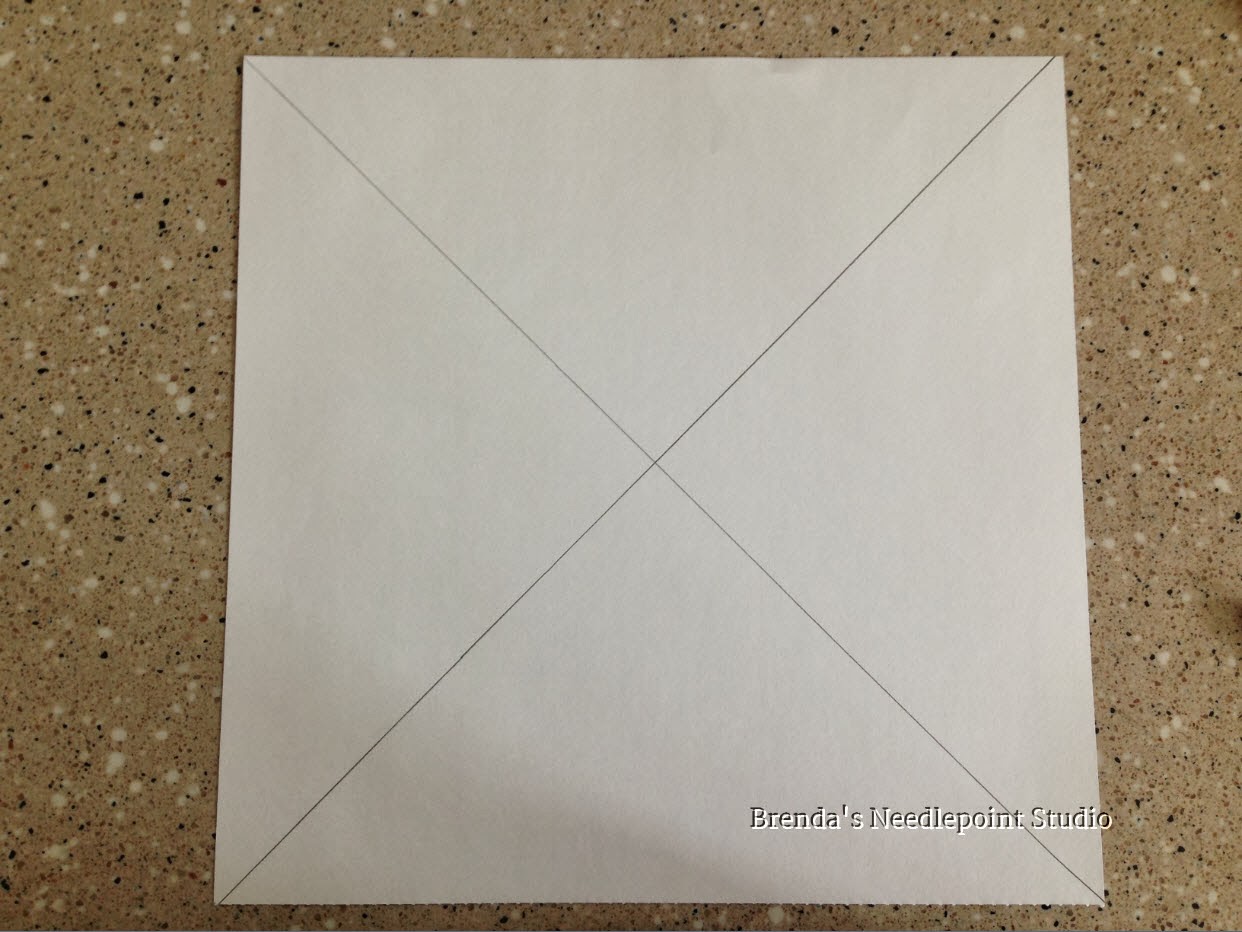 3.  Fold each corner towards the middle intersection, wrong sides together. 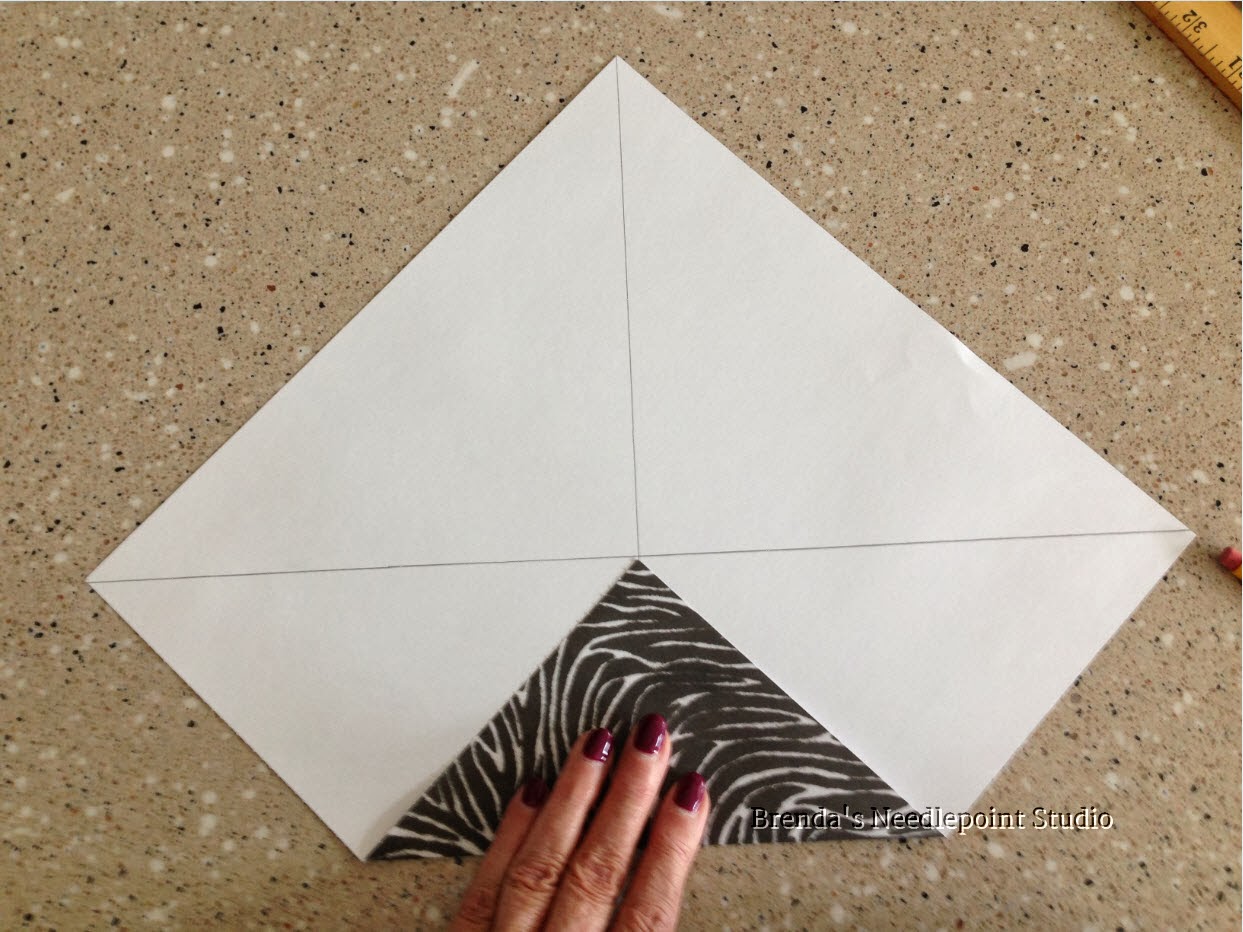 4.  This is what it looks like when all 4 corners are folded towards the middle 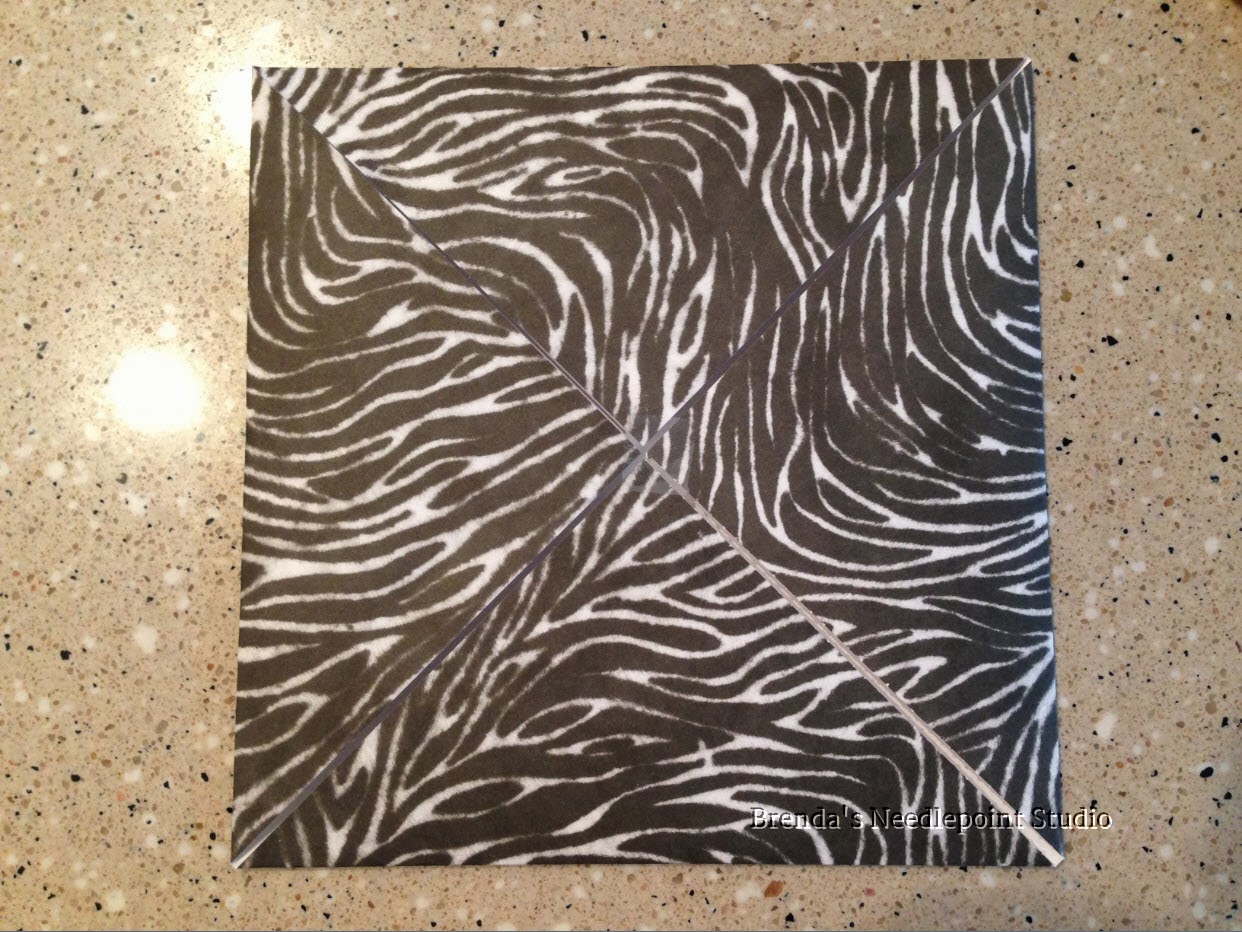 5.  Fold each point back on itself towards the box edge, right sides together 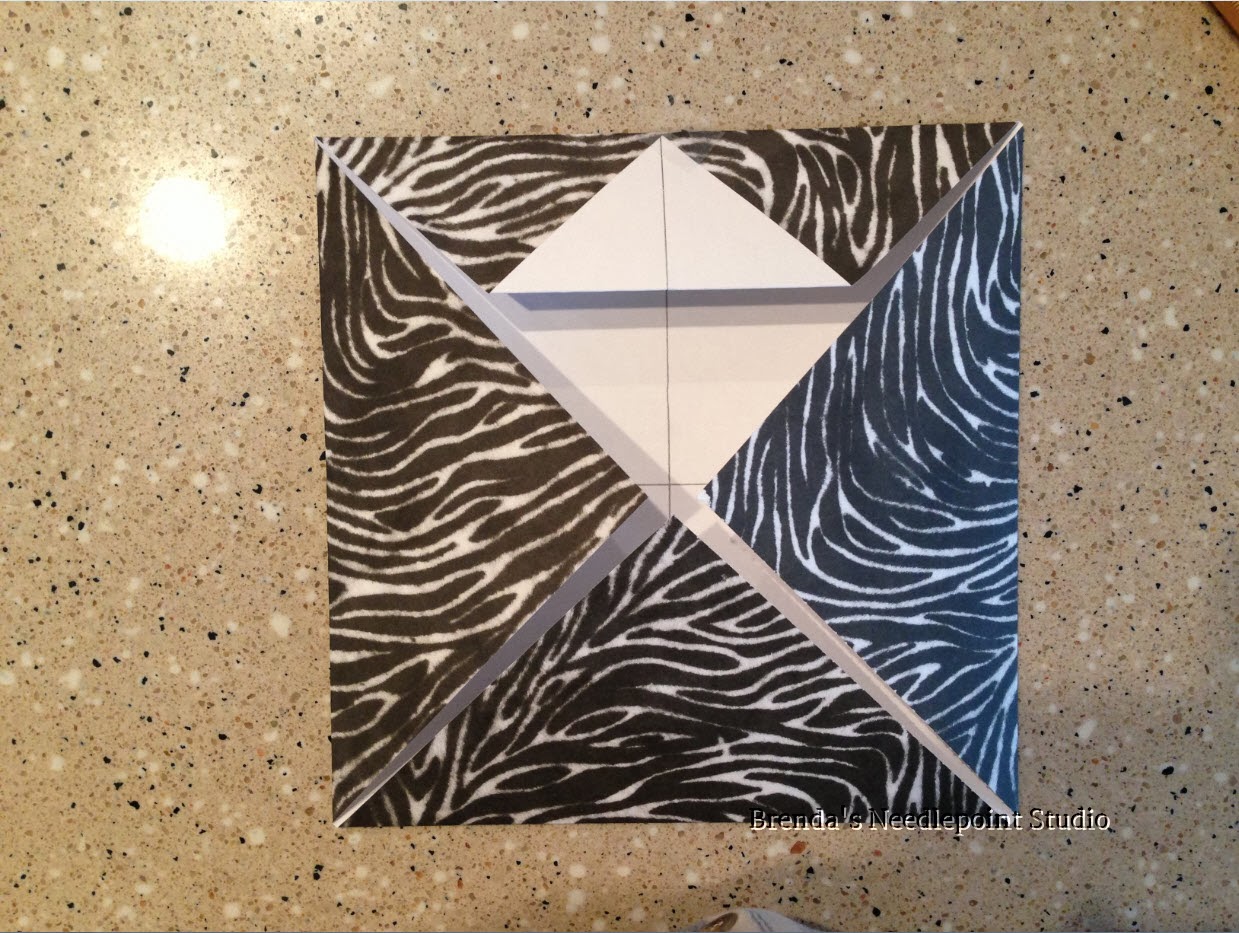 6.  This is what it looks like when all 4 points are folded back 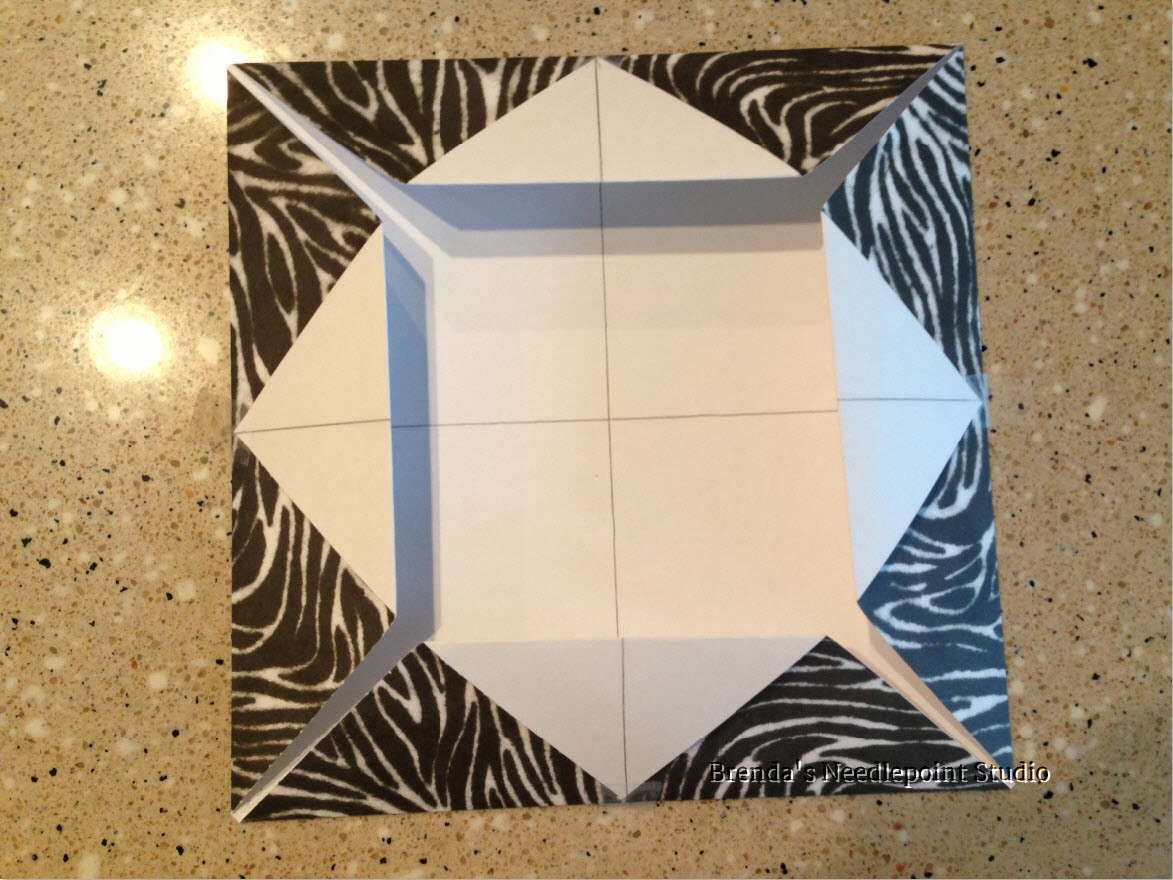 7.  Open out all the folds as shown below 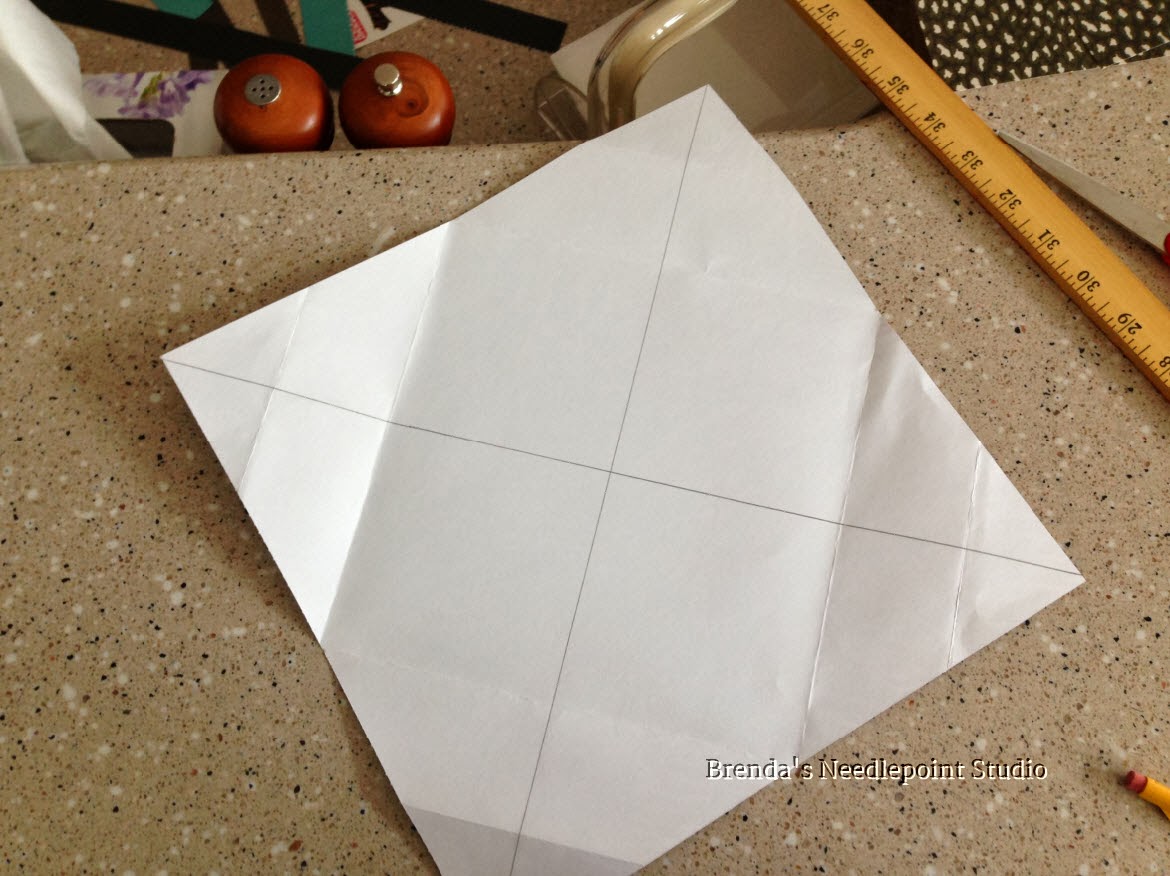 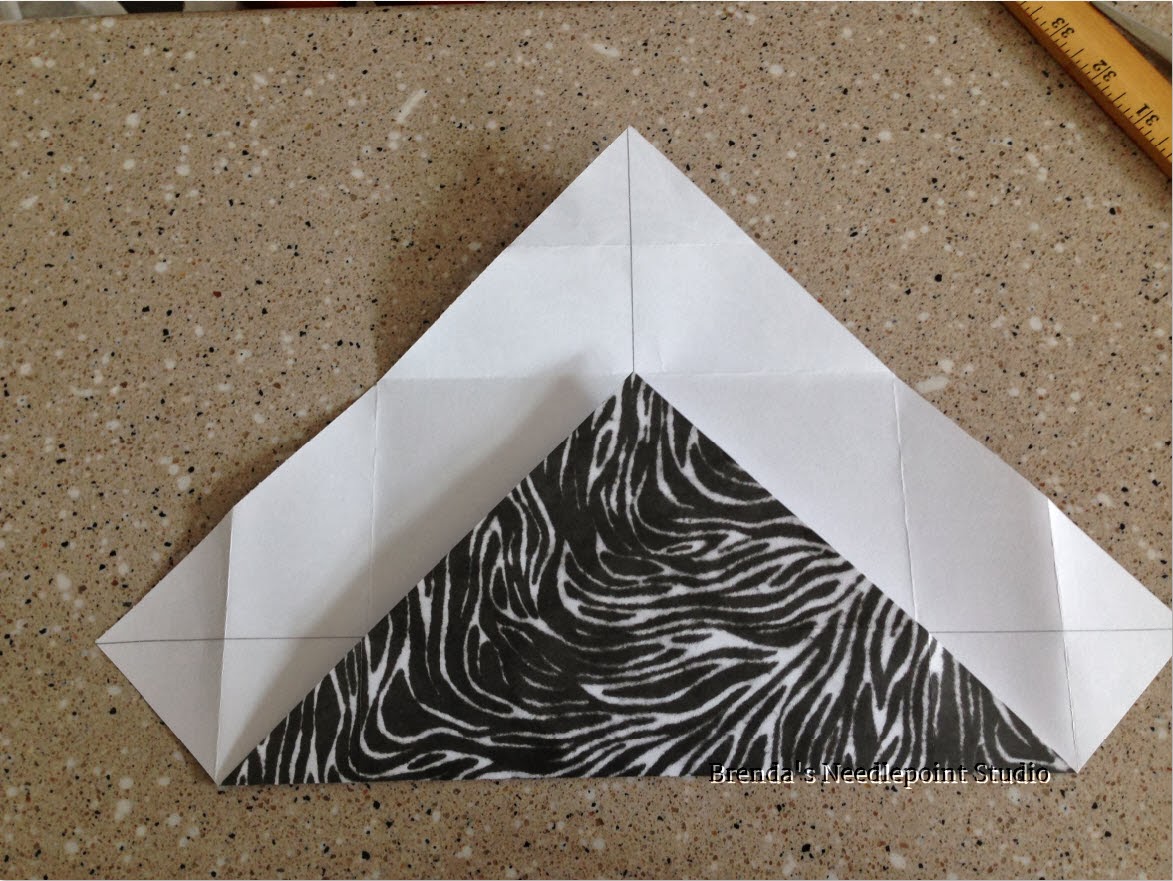 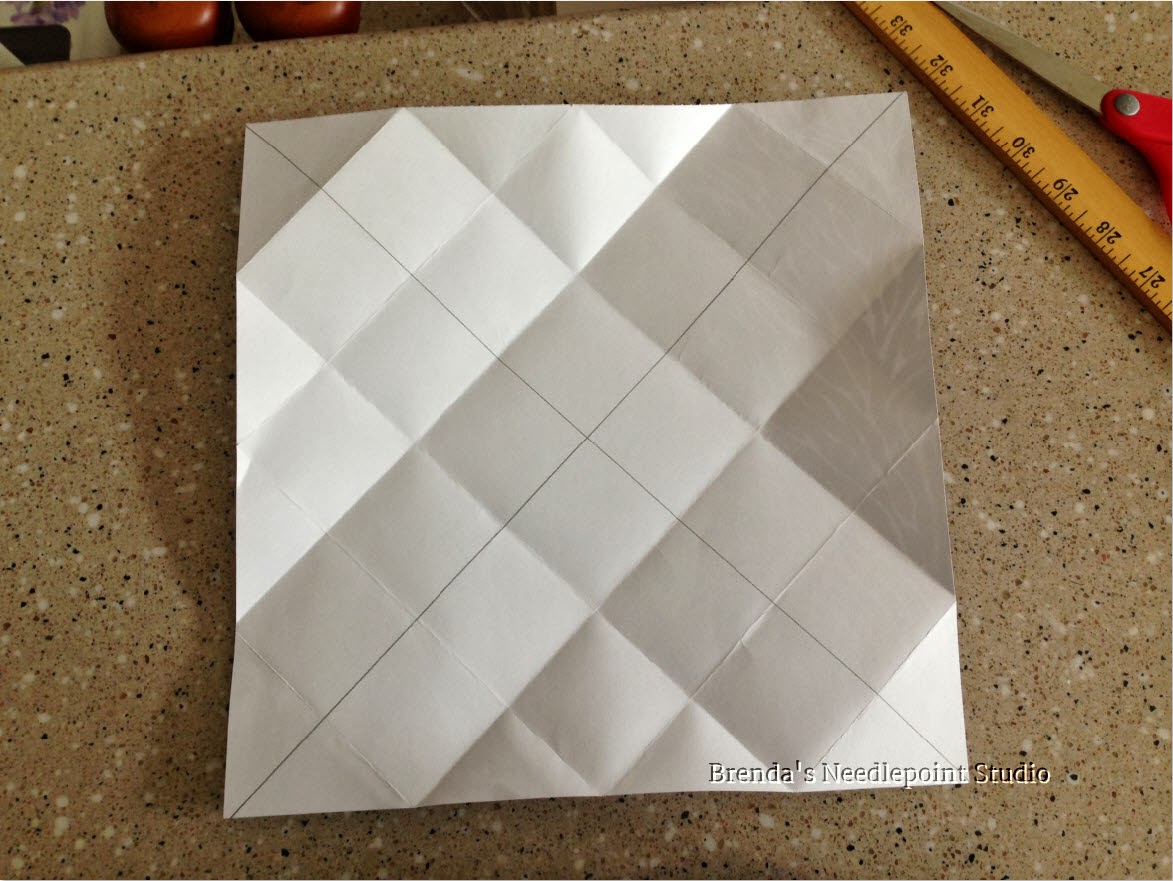 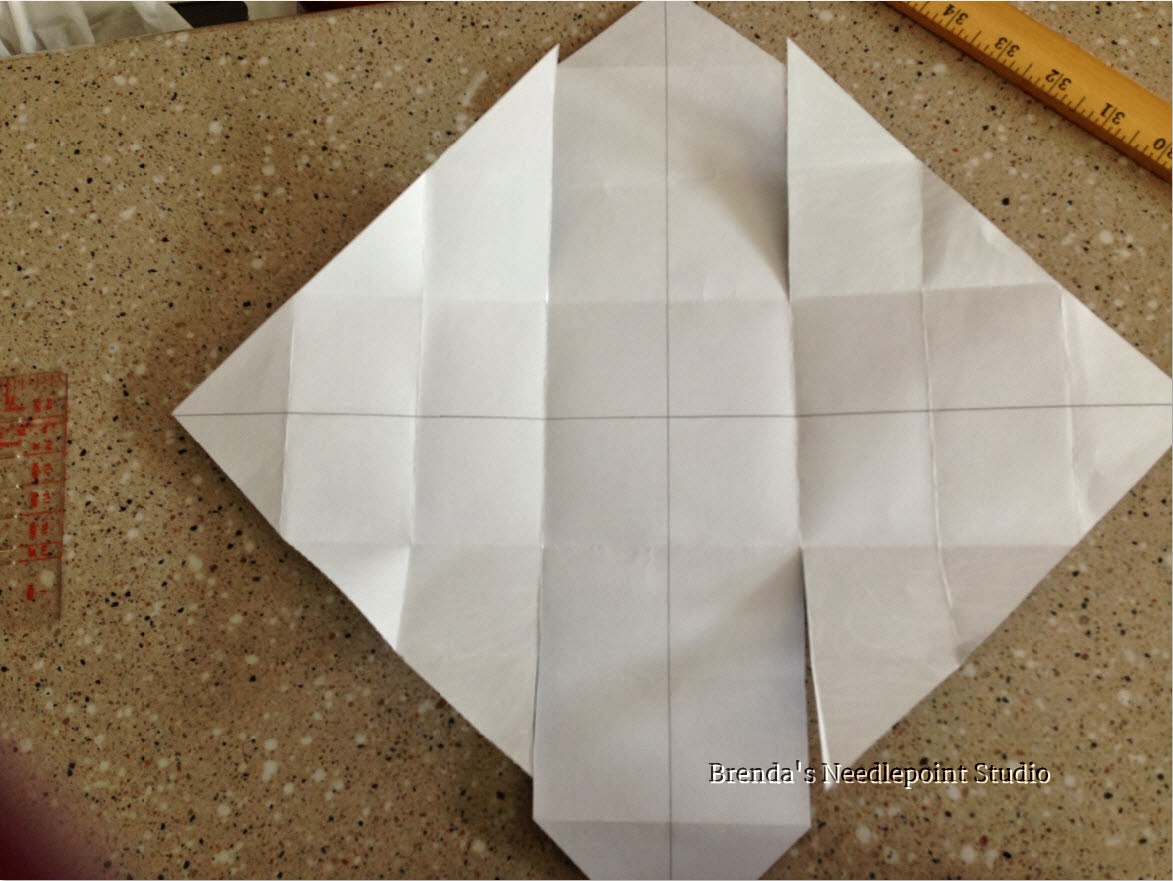 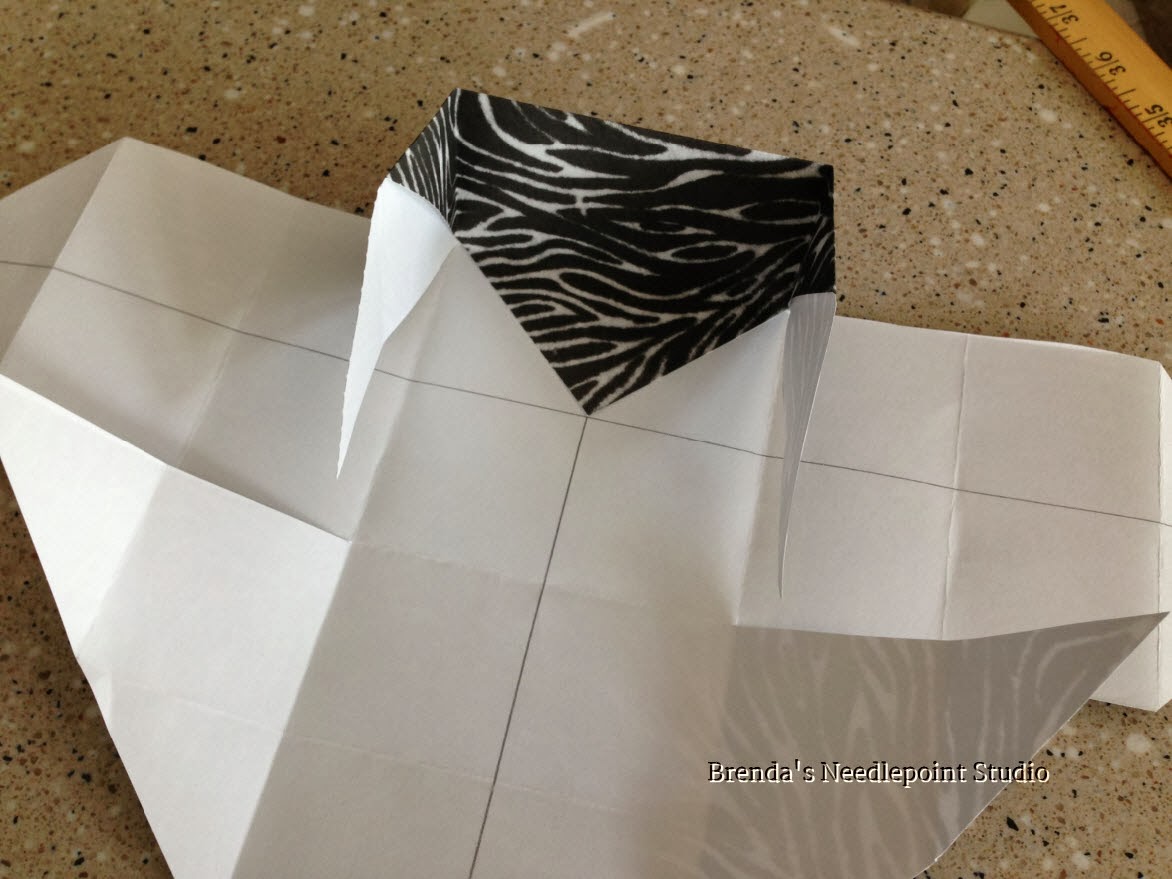 12.  Fold other uncut side into a box shape.  It will look like the picture below 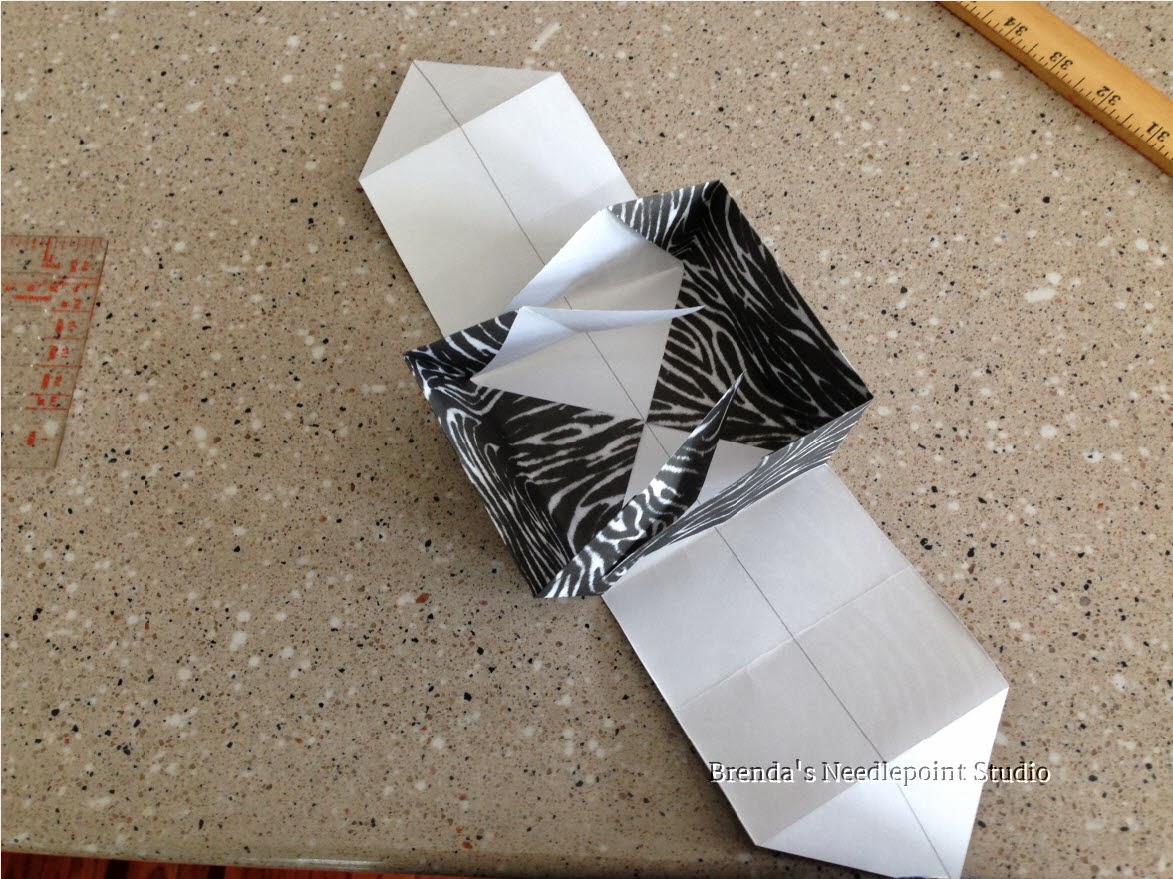 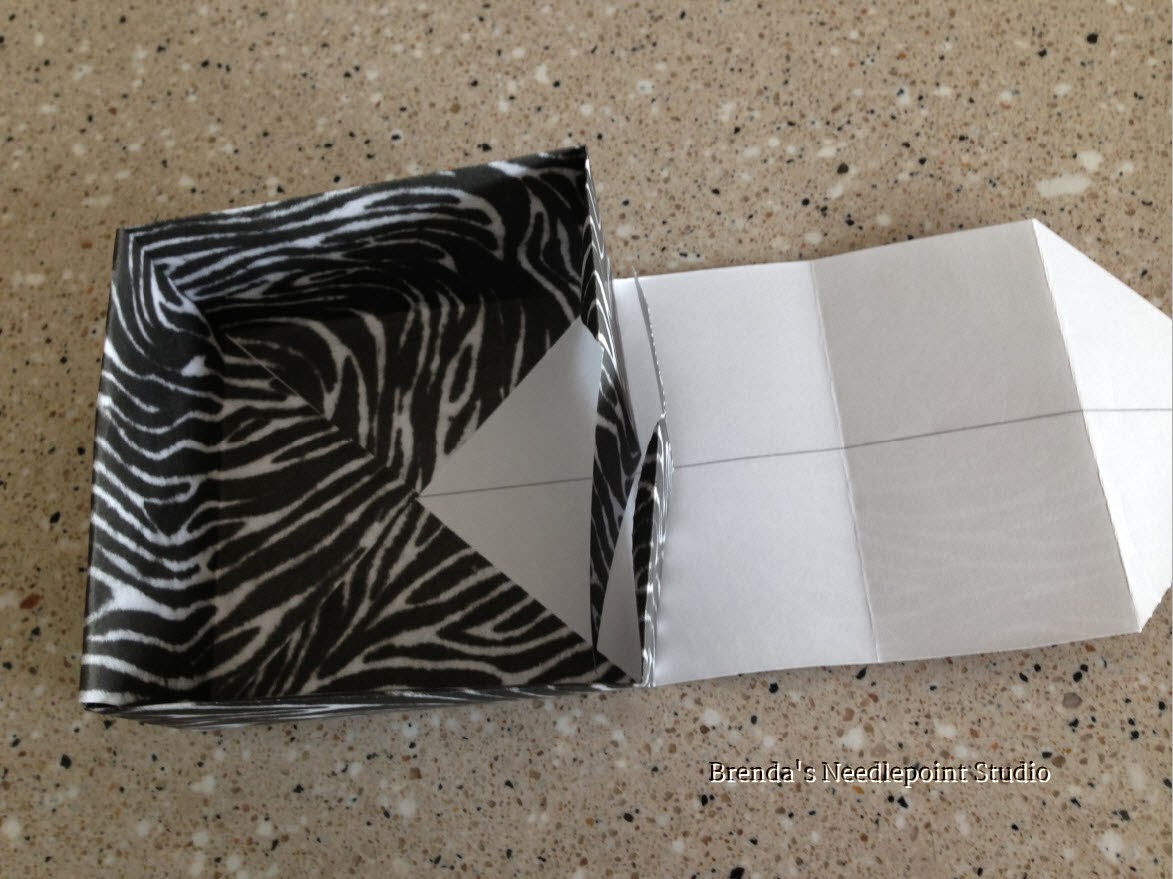 That's it.  Wrap some ribbon around it, attach a pretty bow, and you're done.  I hope you enjoy making this little gift box and let me know if you have any questions.
Posted by Brenda M. Côté at 6:00 AM No comments:

December 4, 2013--Recently I signed up to take three more online classes from the Stitches for Effect ladies, Beth Robertson and Suzanne Howren, through the Shining Needle Society.   They are:

I love these classes and have learned so much about threads, their uses, various stitches, when used, etc.  I've got a binder filled with examples and refer to it often.

Follow this link for an earlier blog about other stitch classes taken.

December 2, 2013--I've recently added my blog as a "Page" on Facebook called:  Brenda's Needlepoint Studio Blog.  If you don't enjoy using a reader to follow blogs and are currently on Facebook, please look up my Facebook page and click "Like".  You will then automatically receive updates.  My Facebook family and friends can now see what I'm up to in the needlepoint arena without having to wade through all my posts.

November 8, 2013--The November lesson is done.  I like the chain pattern, but am not sure how I like the colors.  The two narrow edges are now lost.  Looking forward to the final lesson in December.

October 6, 2013--October stitching is now complete and I love how nicely the gold diagonal back stitches fill in the empty space.  Now I'm wondering how the canvas will be stitched between the two outside borders. 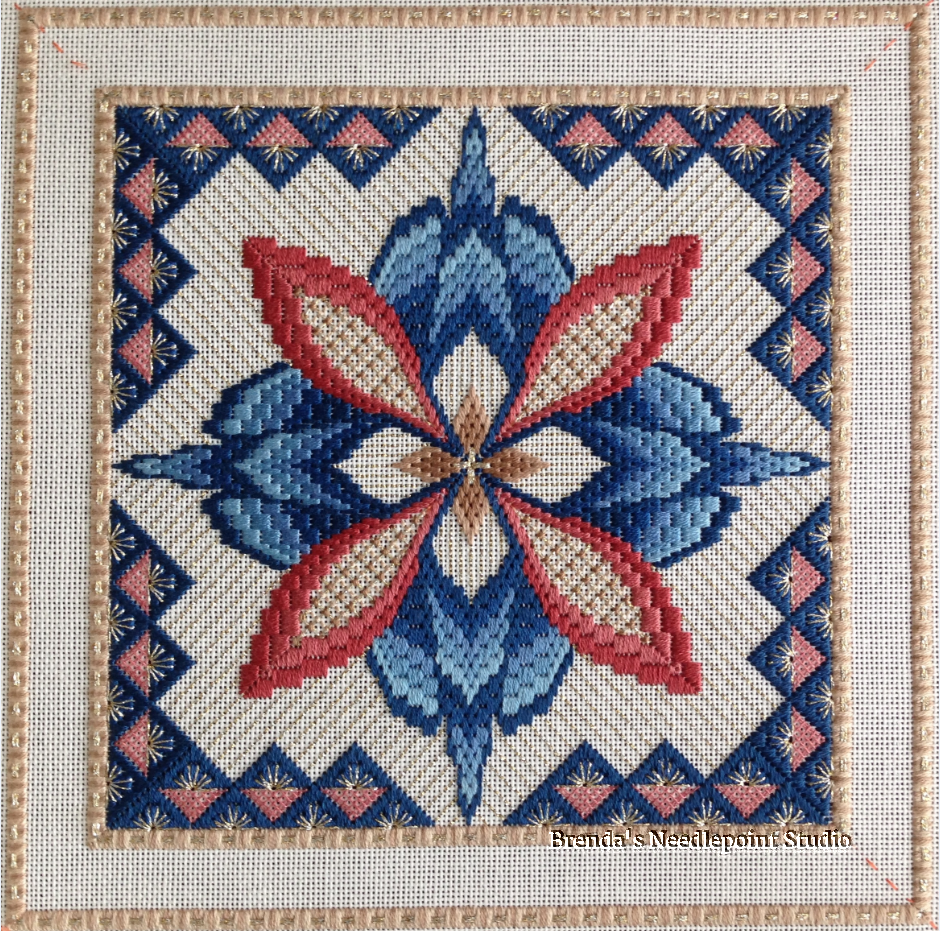 September 4, 2013--The lesson for this month is done.  It's looking very pretty.  Looking forward to what the next three months will bring. 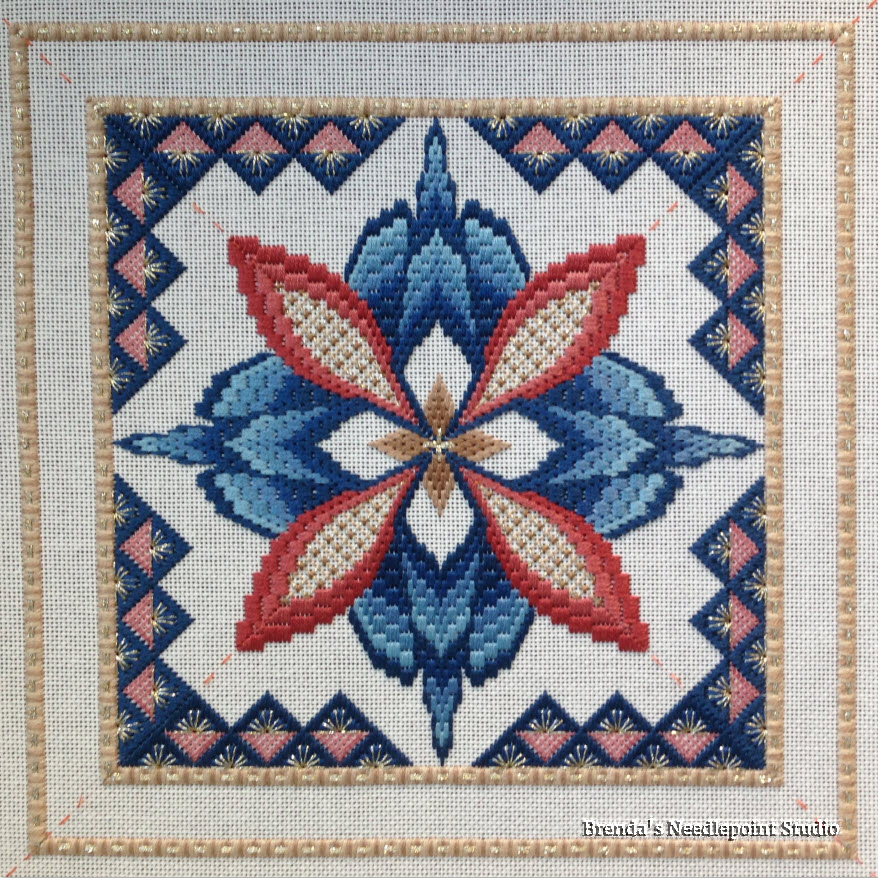 August 16, 2013--I have been asked to list the colors used in this project.  Below are my DMC selections:

August 3, 2013--Just finished stitching the August lesson--took very little time to do this month's assignment.  Am unable to figure out what direction the design is taking, but so far it's been interesting.  Looking forward to September. 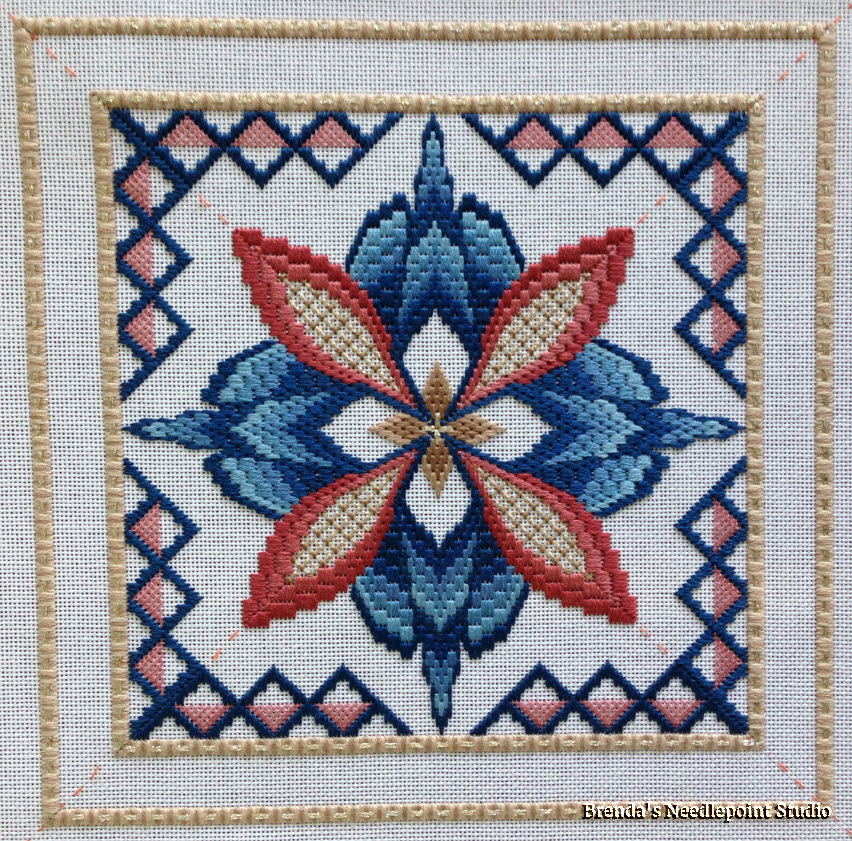 July 5, 2013--Completed the July stitching.   It's a beautiful trellis pattern which fills in much of the space very quickly.  Nice. 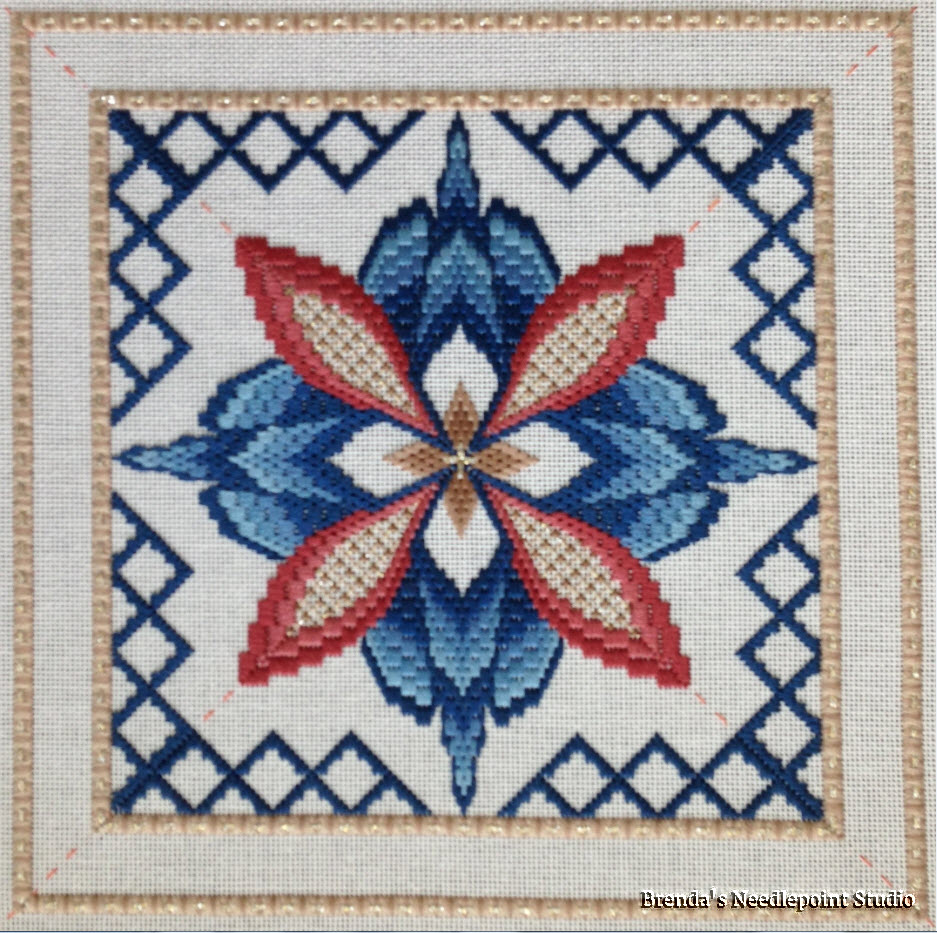 June, 2013--The stitches inside the red area remind me of a fruit pod.  Pretty. 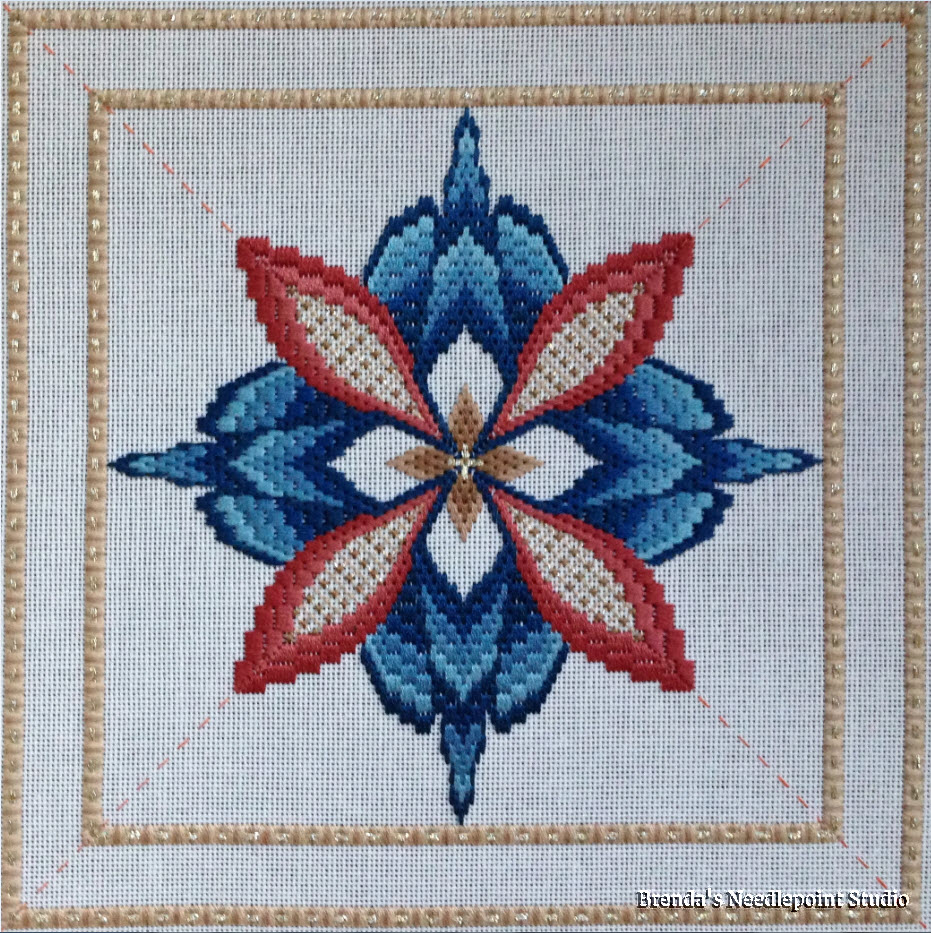 May, 2013--The additional blue section is adding nice dimension. 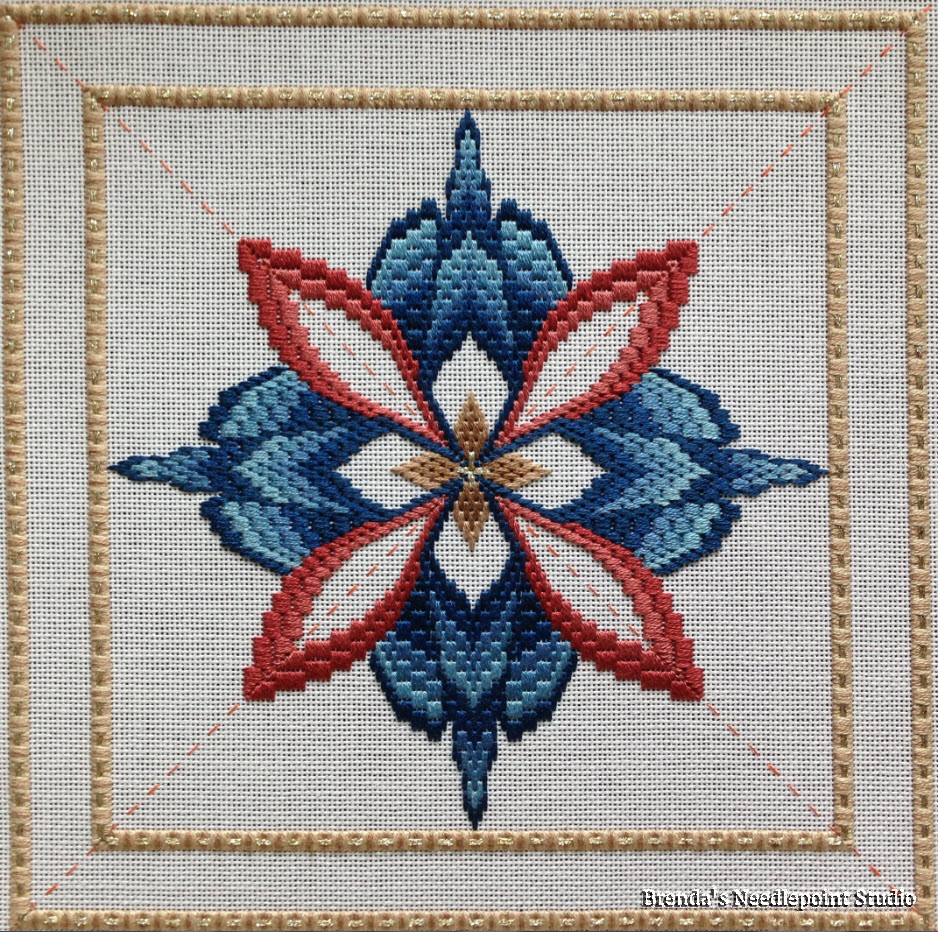 April, 2013--The four corners are called leaves by Debbie.  If I had known this at the beginning, I would have reversed the colors.  Oh well, I'll play it out through December and hope it won't matter. 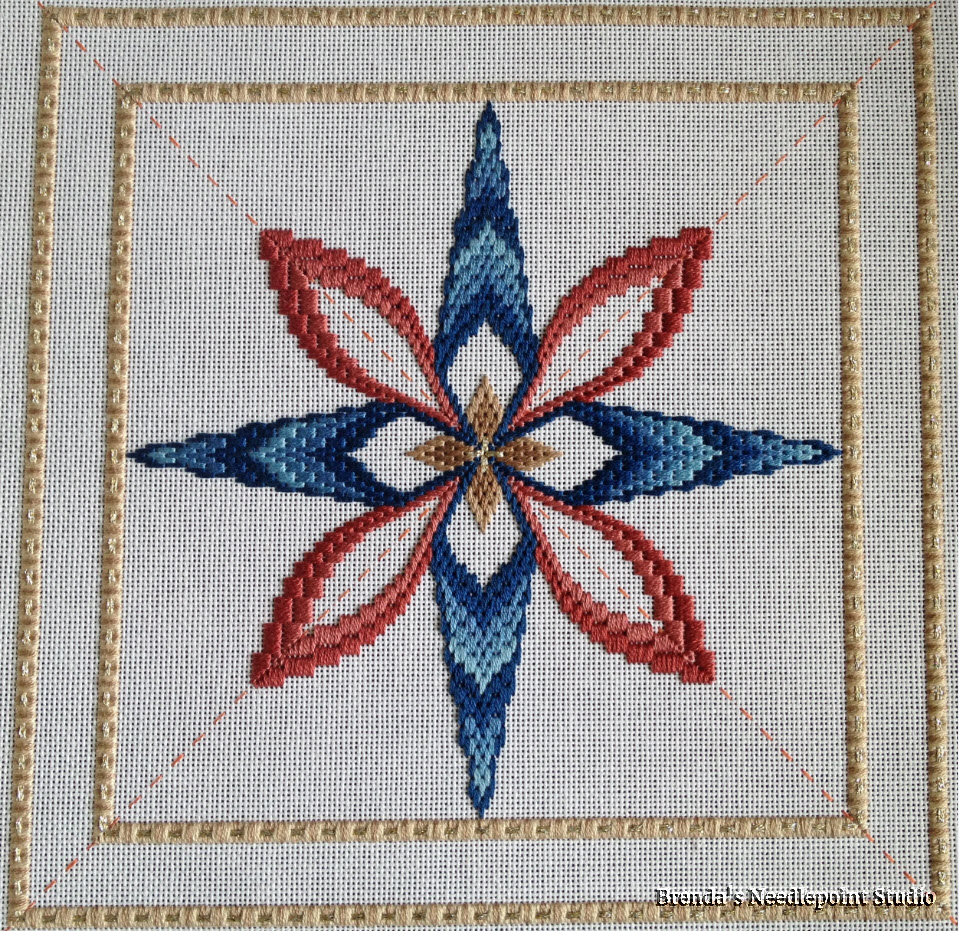 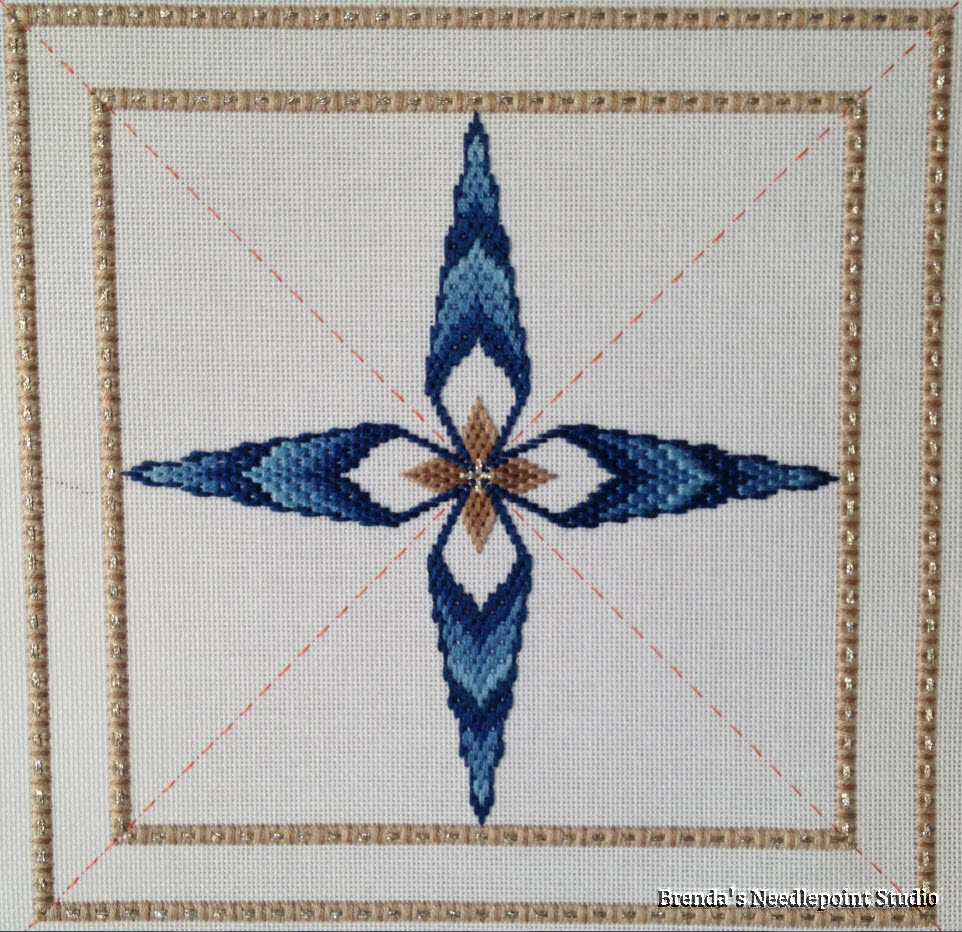 February, 2013--What a great beginning.  Love the pattern. 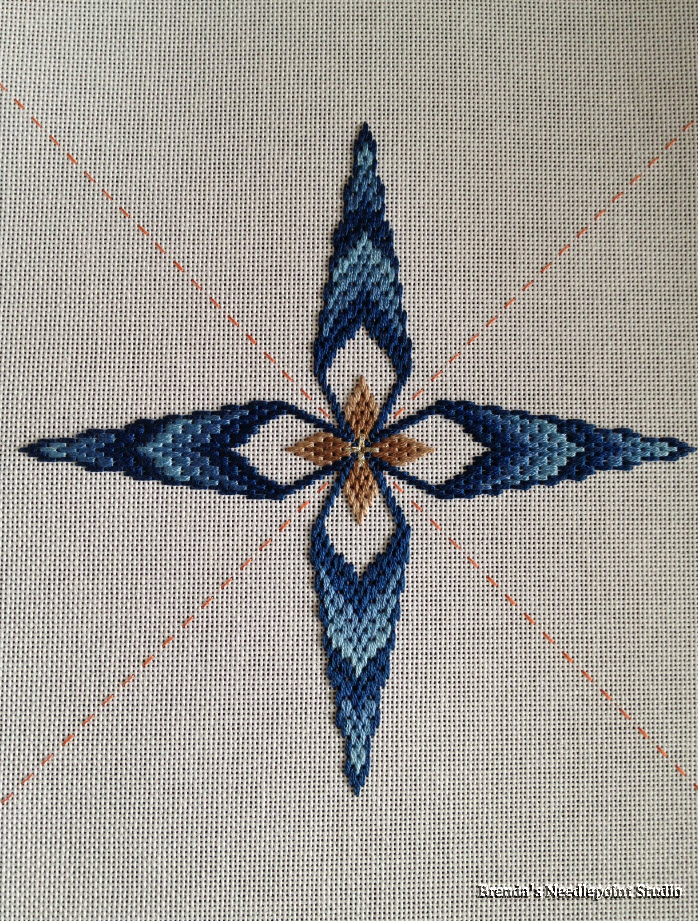 January, 2013--Love starting a new ANG Stitch of the Month Mystery project.  This is my fourth SOTM and each year has been a real treat to stitch.  This year's project is taught by Debbie Stiehler using Bargello stitches.  January's lesson was to lay down basting stitches from corner to corner on the diagonal.  Onward to the fun.