February 24, 2016--Gay Ann Rogers has designed some beautiful geometrics to celebrate the Downton Abbey television series running on PBS.  She has made them available through to the series finale on March 6th (click here).  I've ordered all three projects (photos below) and even ordered the thread kits from Kate Gaunt.  I love how they so beautifully complement the costumes (pictured with the needlepoint designs).  I'll post about each design individually as they are stitched.

February 15, 2016--Have been experimenting with different types of thread and think I've come up with the right combination of thickness and decorative metallics.  I like this one so much that I'm going to use it as the cord around my Imperial Heart project.   It has a few uneven areas, but when wrapped around the heart, don't think they'll show that much, if at all.

February 11, 2016--My interest was piqued after reading about this braid making tool on D1D2's January 18th blog.

So taking advantage of some eBucks to spend on eBay, I found this Beginner's Small Kumihimo Kit.  It came with two colors of cord, a Kumiloom or braiding disk, how-to instructions, thread bobbins and bits to make a necklace.  Last night while watching TV I worked up the braid and now I'm hooked.  It was so fast and easy to do.  Next cord will be made with needlepoint stash threads for a similar look, but with a smaller diameter to use for the finishing of ornaments.   Too cool!

February 9, 2016--Completed the stitching of this adorable santa and it, along with some others, will be sent off for professional finishing into ornaments.  Love the beard.


January 11, 2016--Signed up to take an online class through Shining Needle Society called Christmas Tree Santa Ornament which is being taught by the designer herself, Janet Zickler Casey.  I love these santa ornaments and plan on working three different ones at the same time (I'll write about each one separately).  The face is stitched and now I'm ready to do the fun stuff--hat, beard and mustache.

February 8, 2016--This project is now framed.  Michael's Arts & Crafts did a wonderful job and I know it costs less than half of what I would have paid at a traditional framing shop.   Very happy.


February 3, 2016--My first completion for 2016.  This was an "in process" project that has taken four years to stitch and it's nice to have it done and at the framers.

January 24, 2016--Almost done!!!!  Finished stitching all the little snowflakes (27 of them to be exact) and must now "bury" the back threads.  The picture below shows the mess.  Instead of burying the threads for each individual snowflake as it was completed, I just ran the threads all over the place with the intent of cutting them into manageable lengths to hide them all at the same time.  This is going to be a TV project for sure.

December 31, 2015--Finished all the large snowflakes and have begun stitching the small ones.  This is so pretty and wish I had more time to get this done, but it doesn't look like it's going to happen this year.  Not complaining though.  Have had a wonderful year and 2016 looks even brighter.

Wishing all of you a wonderful New Year with lots and lots of stitching.


September 19, 2015--The 7th and last border is done.  This was a complex stitch requiring the use of four threads, one after the other.  Lots of work, but the results are beautiful.  Now to finish the silver snow flakes, then I'm done. 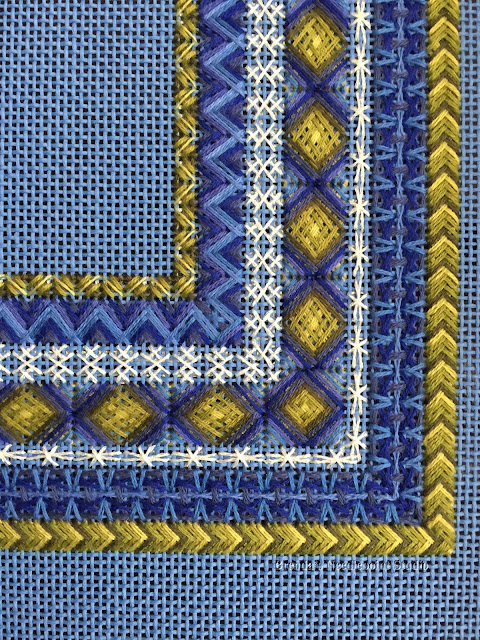 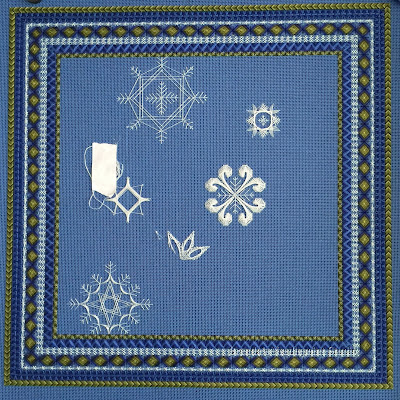 July 9, 2015--The 6th border is now stitched, only requiring 4 passes using 4 different threads.  The last border is going to take some time involving 4 threads in a fern stitch variation.


April 30, 2015--Border 4 is complete.  This one took quite some time to stitch--9 different colors were used in the layering process.  The next border will stitch up very fast.

April 7, 2015--Started stitching on this project and, after working on a few of the large snowflakes, decided to get some of the border done.  Three of the seven borders are now stitched....whew!  This is a large piece and at the rate I'm stitching, will take awhile to complete.


December 11, 2014--This project, called Let It Snow, was a class taught by Toni Gerdes at the 2012 ANG Seminar in San Antonio, TX.  I've wanted to complete the stitching, but so many things kept nudging it to the bottom of the pile.  My local ANG chapter, Delaware's Seashore Chapter, has recently challenged its members to complete 3 WIPs or UFOs by December, 2015.  I chose this project as one of my three.

As what happens in all of these classes, there's the usual thread spaghetti to deal with.  Because it's been two years since I've looked at this project, I now have to re-read all the instructions before picking up a needle.   I will post again when all of the beautiful snowflakes have been stitched.