December 31, 2021--During another year of ups and downs with COVID, I managed to complete the stitching on 10 needlepoint projects.  Here they are from most recent (December) to oldest (January).

Many have not yet been finished into ornaments, framed, etc.--I'm waiting to stitch all the projects in the collections before working them up into ornaments (e.g., Janet Zickler Casey's santa collection, Susan Portra's holiday ornament collection).
Also included in this list are the projects stitched in prior years that have been finished into pillows, ornaments, etc. in 2021.
Hope you enjoy looking at these pictures and walking down memory lane with me.  Click on the photo's caption to see more information about each project.


Projects that were stitched in prior years, but "finished" in 2021:

Email ThisBlogThis!Share to TwitterShare to FacebookShare to Pinterest
Labels: 2021 Completions

December 26, 2021--This fun project is now framed and hanging in my guest bath.  Looks wonderful--the colors are spot on.

December 5, 2021--The last lesson, published this month, is done and this project is now ready for framing.   All that had to be done is a Slanted Gobelin stitch over two threads all around the piece as a border using the last color labeled as D6.  The lesson also called for stitching the blue sky on top in a Nobuko stitch which I had completed last April.

Below is a photo of the completed project along with information about what threads I used and in what month.  If you are thinking about doing the 2021 Stitch of the Month, hopefully this additional information will be helpful in figuring out what colors were used and when.

All in all, a fun project to work on

November 8, 2021--I may now be finished stitching this project.  The lesson for November covered the rest of the layers or rows (9 of them this month) for a total of 42 layers, so that's done.  I believe the only thing to cover in December is the top or sky area, which I've already stitched.

The thread colors in the photos below look different, dependent on the lighting available to me.  I apologize for that since this makes it hard to figure out exactly what colors I've used.  Also, we weren't given the number of skeins/cards needed for each color, so when I put my threads together from stash, I did run out of a few colors and, rather than ripping out previous stitching, just went with a different thread, but with a similar color.  Hope it's not too noticeable.

Below are two concerns about the November lesson:

1) So far, I have not used the last thread identified as "D6" in the January suggested thread list.  Since this is identified as a black thread, I'm wondering if it's used as a border around the project.

2) The last layer, a Slanted Gobelin stitch, is worked over 2 threads except under the second column.  There we are instructed to work the stitch over 5 threads.  I believe she meant to say over 4 threads.

October 7, 2021--The October lesson consisting of 7 layers is now done.  Coming into the home stretch with darker colors becoming prominent.

September 6, 2021--Here is Stratigraphy stitched through the 9th lesson in September.  We're now over halfway through the design layers and it's starting to look interesting.

August 7, 2021--The August lesson is stitched and there are now 22 layers or rows.  I'm working up this project using threads from my stash and learned I don't have enough of a few colors, so had to reorder more.  Unfortunately, dye lots have changed, so some of the layers look a little different than earlier stitched ones.  Oh well, it's not enough to make me start over or rip out previous layers.

July 3, 2021--This piece is moving along nicely.  Here's a photo with 7 months of lessons done.  I know this is less than half of the project, so I suspect we'll get really busy in the next 5 months (August through December).

June 3, 2021--June's lesson consisted of only two layers, so it was stitched in hours.   It's beginning to look interesting.

May 5, 2021--There were six layers to stitch for May's lesson, so now a total of 12 layers have been done.  There are a lot of greens in this group and I'm hoping to see more color variety in the upcoming lessons.

It took me two days of occasional stitching to work up the six layers for this month, not bad.

April 6, 2021--The fourth lesson published April 1st has been stitched.  I decided to also stitch the "sky area" since there was so little to do with this month's lesson.  I could see from the project photo that the sky consisted of the Nobuko stitch which is easy enough to do.  I chose a very light blue which wouldn't fight with my beige, blue/green and gray colors of the stratigraphic layers.  So far, so good.

March 3, 2021--Completed the third lesson published March 1st on the ANG website for its members.

I'm wondering why we had only one row to stitch--at this rate, there will be many, many rows to stich during the last months of the year.  I also wanted to stitch more rows to see how my colors look together before going too far.

I'm also wondering why her M1 thread in February is darker than the M2 thread used in March as shown in her project photo.  Oh well, here's my three months worth....

February 1, 2021--The lesson for February was fast and easy, especially now that I have my colors picked out.  Here's the result to date with three rows stitched:

January 11, 2021--I love working on ANG's Stitch of the Month projects.  They usually require a few days of time each month and by the end of the year, you have a very nice project that was fun to work on all year long.  This year is no different.  It is designed by Jennifer Riefenberg and called Stratigraphy.  I love the two folded columns, one moving forward, the other back.

I'm including a picture of the threads I plan to use taken from my stash (tans--4 threads, blue/greens--4 threads, silver greys--6 threads).  They aren't exactly what the designer called for, but they'll work perfectly in the room where this project will be placed (I hope 🤞).

Here's a photo of the January lesson which covered canvas types, threads, information about the design background, and the first row or layer of stitching.    I'm working this on Congress Cloth.

Email ThisBlogThis!Share to TwitterShare to FacebookShare to Pinterest
Labels: 2021 Completions, ANG Stitch of the Month, Geometrics

December 15, 2021--Registration is now open for the 59th Annual Woodlawn 2022 Needlework Exhibit in Alexandria, VA.  This is the largest exhibition in the Mid-Atlantic region and much anticipated by exhibitors and viewers alike.

This year the show will run from March 2nd through the 31st in 2022.  The online registration process couldn't be easier and makes deliveries and pick-up more efficient. 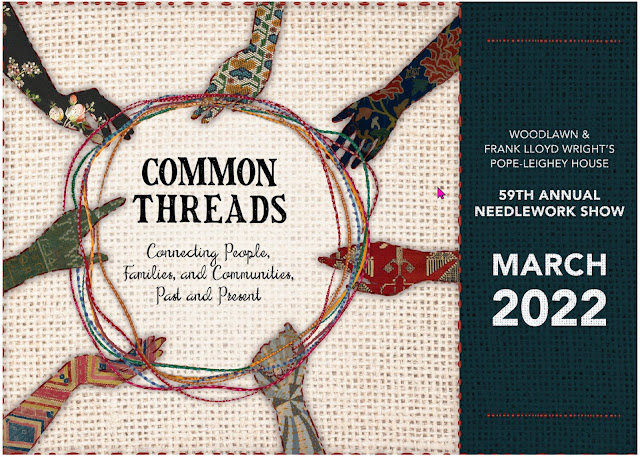 November 18, 2021--This delightful project (scroll down for details) is now framed (done by Michael's Arts & Crafts in Rehoboth Beach, DE) and is hanging in my craft room (second photo below) with other needlepoint related items.  BTW the large "N", information about which can be found here, stands for Needlepoint (so say I).

Thanks Checkerspot Stitchers of ANG for choosing such a fun project to celebrate your chapter's anniversary. 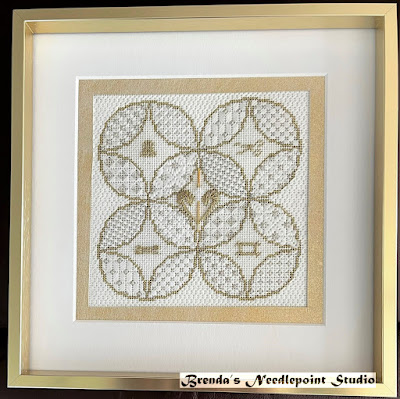 June 10, 2011--Finished the decorative stitches a lot faster than anticipated and this project is now ready for the framer.   The bump in the middle is caused by the golden needle placed in between the heart openings in the center "diamond".  Hopefully it isn't disturbing the canvas enough to cause problems with framing.  I'll place a heavy weight on it to try and flatten it out a bit.  All in all a totally enjoyable piece to work on.  Thanks Debbie L. of ANG Checkerspot Stitchers Chapter for great notes.

March 18, 2021--Worked two stitches this month--3 and 4.  Wanted to finish two of the circles before putting this away for next month.  This is a very challenging project.  The sections have complex, compound stitches that require lots of compensation.

February 20, 2021--This month's installment, Stitch 2, is completed and this project will be put away until next month.  A large project such as this one seems much less daunting when divided into 12 month segments.

January 22, 2021--I've just completed Stitch 1 placed in two areas of the interlocking circles and decided to do one stitch each month which will take me through August (there are eight different stitches used).  Then I'll work on the five decorative logos to be placed in the circle centers, then the background.  That should take me through December.  The stitches for the interlocking circles are very complex with lots of compensation along the edges.  But a fun challenge non the less.

January13, 2021--To celebrate a recent anniversary, the Maryland Checkerspot Chapter of ANG (of which I am a member) is stitching Friendship Circles taken from the ANG 2019 Chapter Project Book (CPB).  It's a lovely project designed by Carol Algie Higginbotham with needlepoint related logos stitched in the areas between the interlocked circles.  When finished, I'll have it framed and hang it in my craft room.  This is my progress to date....

November 16, 2021--Just picked up this project from Michael's Arts & Crafts in Rehoboth Beach, DE and love it.  The mats coordinate perfectly with the rose and stem while the frame picks up a bit of copper in the border stitches.

Bargello Rose - Updated 7/14/21ly 14, 2021--The stitching on this beautiful rose is finished and the project is ready for framing.  Learned a number of new things and am proud to have gotten through some of the more difficult segments.  Love the border stitch and it has a surprise of shiny color along the upper and lower edges which doesn't show in the photo.  We students had the option of using Chinese characters in the "chop" block or our initials and date.  I opted for the latter.  Now for an oriental styled frame and mat.  Stay tuned.

Had some time yesterday to begin working on a new project offered by ANG's CyberPointer Chapter called Bargello Rose designed by Wendy Moore.  The lessons are offered over five days during the chapter's online July meeting and are wonderful supplements to the instruction manual received with the kit (canvas and threads).   It's a huge piece--the canvas measures 18" x 11" and when framed, will be quite large.

Here is the rose worked through most of Lesson 2.

November 13, 2021--I've redone the tip of this red light ornament by removing the french knots and putting in straight stitches.  Did not like how the french knots came out--they looked too jammed in and appeared crooked.  I'm much happier with my "redo".  Here it is:

August 21, 2021--Here's my 11th stitched Holiday Ornament designed by Susan Portra with instructions published in Needlepoint Now Magazine, 2014 Vol XVI, No. 6.  This one is a red light bulb ornament and, for the most part, I love it.  However, the french knots on the light's bottom stitched with RG Flair make me cringe when I look at them--just too uneven and too many crammed into a small space.  Hopefully it won't look so bad when "finished" with cording and a pretty ribbon bow.   For a list of Holiday Ornaments published in Needlepoint Now Magazine, click here.