March 15, 2014--Recently signed up to take Judy Souliotis' online class through Shining Needle Society called Asian Journey.  Class will run April 15 through July 31, 2014.  It's a beautiful piece on congress cloth and I chose the blue colorway.  Am not sure if I will stitch the sedans throughout the piece or chose the alternate design (both shown below).

March 10, 2014--Presented this grape design to our friends at their winery in Delaplane, VA this weekend.  They love it so much they fear it may be stolen if they hang it up in the winery, so may place it in their beautiful home located on the property.    I would like to do another wine related project some day for them--there are so many wonderful projects out there.


November 9, 2013--Fini!  Now to get it framed and present it to our dear friends at their winery.


November 3, 2013--Now working on Lesson 4 and am on the homestretch.   The instructions call for padding under the leaves, but I found it difficult to know exactly where to place the padding.  So I outlined the area where the actual leaves are stitched to see their shape, then placed the padding inside the basting.  Now that's done (see both pictures below), I'm ready to finish the leaves and stems (love the varigated large grapes in the center diamond).  Final pictures will be posted soon.


November 1, 2013--Lesson 3 done.  Love how this is beginning to look like a stained glass window.  Pushing ahead now to get this finished.  One more lesson to go!

October 29, 2013--Lesson 2 done.   In this lesson we completed the lattice work and small grape clusters with leaves.  The instructions called for a finer thread for the lattice and grape clusters in the inner square which seems to make them recede.  I like the effect.

October 24, 2013--Whew, finished with Lesson 1.  The borders are gorgeous with enough difference to be very interesting.  Laura explains in her lesson that she liked the design with only the inner border, but when she added the second, outer border, everything popped.  I agree.  Now on to Lesson 2 covering lattice work and small grape clusters.  BTW, to anyone else who may be working on this project--pay attention to the slant of the stitches.  The graph left border has some stitches going in the wrong direction.


October 14, 2013--Have begun stitching Laura Perin's design called Harvest Time.  This is an online LJP Cyber Class which began October 1 and has four lessons.  I'm nearly finished the first lesson--just need to complete the outside borders, then on to Lesson 2.  When this is complete, it will be given to friends who own a winery in Delaplane, VA.  They have a beautiful site with an old farmhouse which they've converted to tasting rooms on the first floor and administrative offices on the second.  There are many acres of vineyards and a lovely new Tuscan style home siting on a hill overlooking the property. It's definitely a piece of heaven on earth--and the wine is good to drink too. September 24, 2013--Spirit is now complete and am very happy with the results.   In the class given by Sue Reed at the ANG Seminar in 2012, she gave wonderful details on how to color match the overdyed Gloriana silk, when to take advantage of a favored color and how to make a lesser desired color recede. The results make the border appear to change as if light were moving accross the threads.  This is somewhat visible in the photo immedately following the text.  The nap of the threads also appear darker, depending on the light's angle.  The second photo is a more subdued version of the project and the thread variations are somewhat flattened.   Now to talk with my framer on how to best highlight the work. 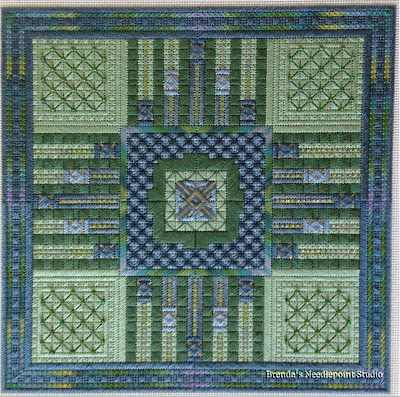 September 18, 2013--Moving along nicely.  Section F is complete.  Sue Reed's instructions did not call for beads, but I wasn't happy about the blank 2x2 thread square areas, so I embellished them with the prettiest green beads having gold irridescents throughout.


September 16, 2013--Section E is totally done and I can now see how beautiful this project will be.

September 6, 2013—All the thread spaghetti has been cleaned up and the center portion completely stitched.  Re-read Sue’s instructions on how to manage color placement of the overdyed Gloriana.  She has some very helpful tips.

I’m excited about completing this project—love the sumptuous silk threads and the stitches which give this piece depth. 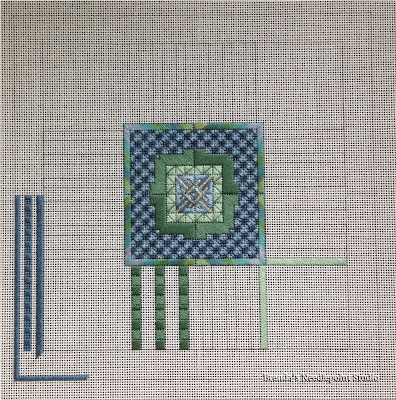 September 1, 2013--Pulled out Sue Reed's Spirit project begun at the 2012 Seminar in Philadelphia and found lots of thread spaghetti.  Over the next few days, want to get re-acquainted with the instructions and begin stitching on this beautiful piece. 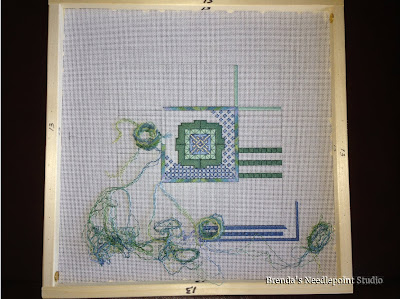 
November 30, 2013--Cool--just received my Correspondence Course Certificate from Rachel Atkinson for the successful completion of Gordian Knot.  Never got one of these before.

Since I'm on a serious mission to eliminate paper files, I've scanned the certificate and saved it to my Gordian Knot electronic file folder (where I have project photos, instructions, etc.).    Eventually I'll need more storage for all my files than available on my external hard drive of 250 Gs, but cloud storage is looking like an affordable option....soon.

August 28, 2013--Gordian Knot is now complete and ready for review by the class instructor as part of ANG's Correspondence Course program.  This piece is beautiful and the picture doesn't convey its texture, color, shine and vibrancy.  Thank you Rachel Atkinson for such a wonderful design.  And thanks again to everyone who helped me with my Neon Rays dye lot problem. 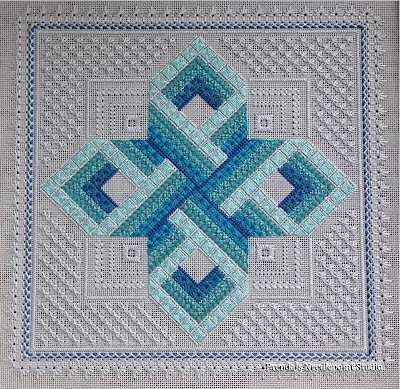 August 25, 2013--Was not able to find Neon Rays in the dye lot received in the kit, but it wasn't for lack of trying.  Thank you to everyone who sent me threads in the hope it matched what I had.

I'm not a purist, but am most definitely a realist when it comes to something like this.  I ripped out the two inside quadrants stitched with the original dye lot of N67, then stitched the inside of all four quadrants with the new, darker dye lot, and think it turned out quite well.  Yes, it is darker, but in my mind, because the area might be considered the underside of a ribbon, it's darker because of shadowing. Anyone unfamiliar with this project probably won't notice a thing.  And as my DH so charmingly commented - "What does it matter?  No one's going to see it anyway."  Yes, that does put things in perspective.  Funny man!

Learned a few valuable lessons.  First, read, then reread what color goes in what section.  None of this would have occured if I hadn't made an error of using NR where Flair was called for.  Second, begin and end threads under the section being worked so that other areas won't be disturbed if you must rip out a section later.

Now on to the corners.  Yay! 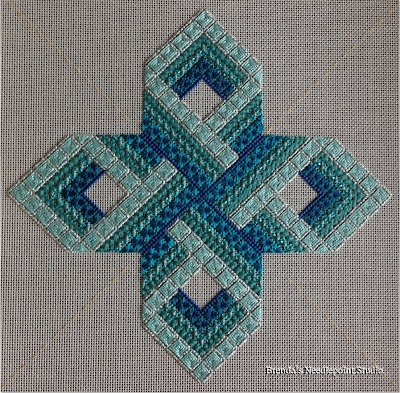 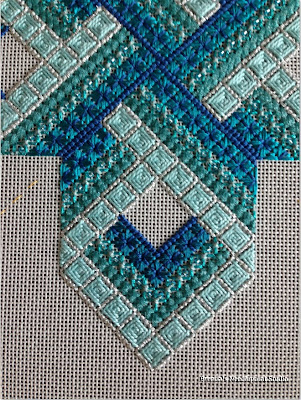 August 14, 2013--Have come up with a dye lot problem for Neon Rays 67.  The thread on the left is a bright turquoise color I received in my kit.  The two threads in the middle have been sent to me in response to my request for help on the Gordian Knot Yahoo Group List, and the last is thread recently purchased from a shop online (don't have an LNS).   All are labeled N67.   There is another sample coming to me from AC--hopefully that will have more turquoise in it.  Crossing my fingers. 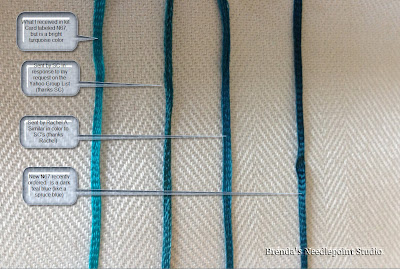 Below are the two sections missing N67 (inside the top and right quadrants).  If I must use a darker N67, hopefully it won't be too obvious.  Stay tuned.


July 30, 2013--Have now completed the design through page 8 of the instruction manual.  It's coming along nicely.   The Squared Herringbone pattern was difficult to follow, so I drafted a step-by-step diagram (shown below) to assist me until my mind figured it out (some of you may know what I mean).


I discovered an error I made on the thread for the stitch on Page 7.   It calls for RG Flair and I used RG Neon Rays.  No wonder the Neon Rays is running low.  I have since ripped out that section and restitched it with the correct thread.  Whew.

I also found an error in the instructions for the stitch on Page 7, the Diagonal Long-Legged Cross.  I made pencil notes on the diagram below noting the stitches at numbers 4 and 6 should start one thread below where they are shown.   It's a small matter, but I was stitching upside down and this caused me to count a few times to be sure I was doing the stitch correctly. 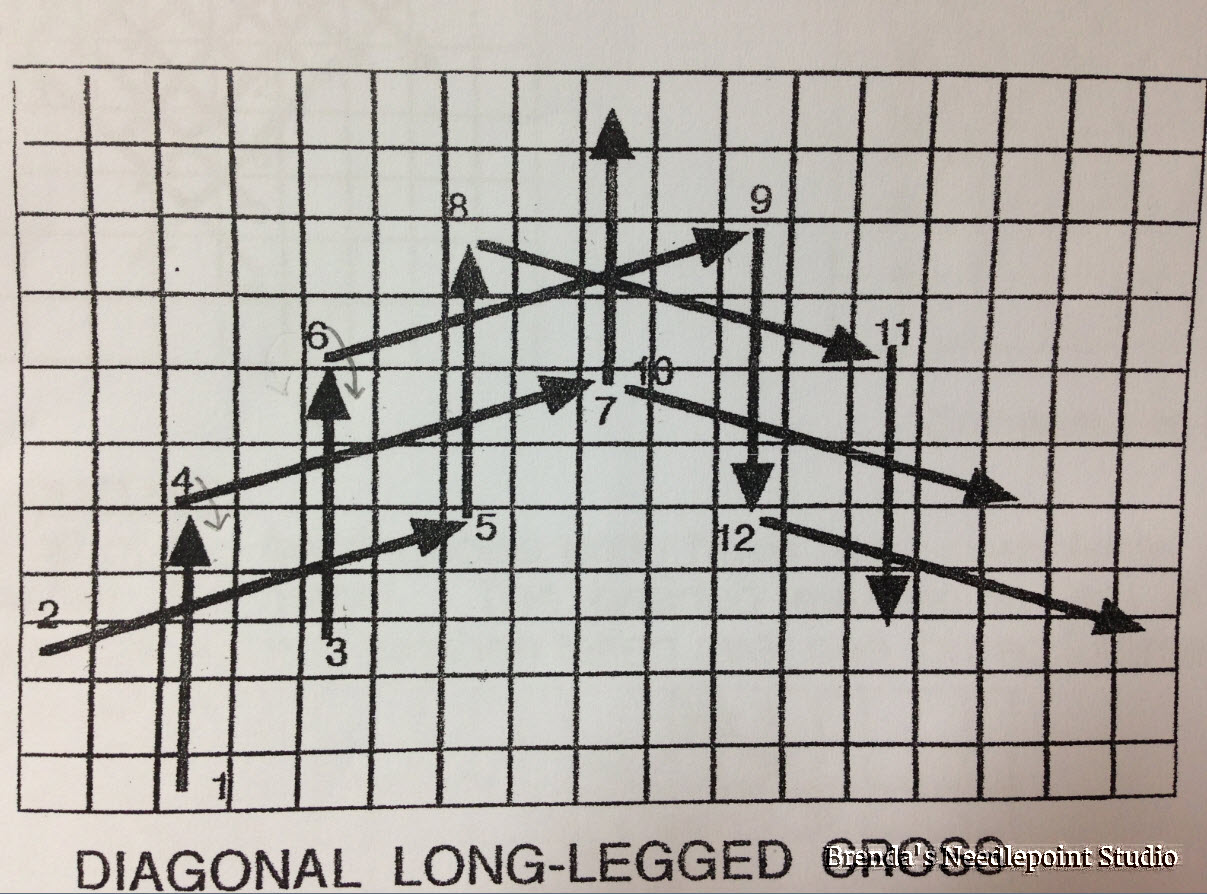 July 28, 2013--Finally started stitching Gordian Knot, an ANG CyberPointers Correspondence Course by Rachel Atkinson.  This course closes on October 15, 2013, at which time course participants can send Rachel their canvases for review by November 1st.   Lots of stitching to do between now and then.  Below is my progress to date: