August 18, 2013--I love writing this blog, but most especially, I love reading the blogs of other needlepointers (as you can see from "My Blog List" on the black right side bar--place mouse on the right side for the bar to show up).

Reading blogs is a favorite morning activity, along with that first cup of java.  It's where other stitchers share their love of needlepoint  through writing, photographs, etc.  Sometimes you can even glimpse a hint of their personal lives.   And the fun part is being able to leave a comment on something that speaks to you personally--a blog give-and-take, so to speak.

Needle Nicely has written a very nice blog about writing comments and how to do so using Google. She says it so well that I'm taking you there through the below link.  Her description of getting through the decoding process is spot on.  She also has a very nice blog to read.  Enjoy.

August 1, 2013--The sampler is finished and off to be framed!  This was so much fun to complete and fellow chapter members who also worked on this project shared many helpful hints.  Will post a new picture of the sampler when it's back from the framer.

In prior posts (written below), I wrote about not wanting to do Band 7, called the Contemporary Drawn Thread Band, as instructed by Catherine Jordan, feeling that it was a little too "helter skelter" for my tastes.   Not knowing how to handle the three blocks in this band, I purchased a book titled BEGINNER'S GUIDE TO DRAWN THREAD EMBROIDERY by Patricia Bage, Search Press Ltd., 2011.    Perfect.  Her instructions and photographs are so clear and sample projects so beautiful, I now want to do more of this type of work.  Below are pictures of the band as I stitched it and another as designed by Catherine Jordan.

PS  When cutting out the horizontal threads, I held my breath to keep from shaking the scissors and clipping the wrong thread.  Success.


July 3, 2013--Band 18 is now complete.  Almost done with this sampler---Band 7 needs my attention. The original design by Catherine Jordan is called Contemporary Drawn Thread, calling for threads to be cut and wrapped together in what I consider to be a helter-skelter manner.    Will be doing further research on what do to with this.

June 24, 2013--Band 17, designed by Mary K. Campbell, is done.  I used beads from my stash rather than what was suggested.   One more band to stitch on the bottom then I must concentrate on what I'll do with Band 7.

June 19, 2013--Another band completed, this one designed by Pat Mazu.  Really like this project.  Each band is so different from the other that it's like starting a new project each time--boredom never sets in.

June 17, 2013--So far I've completed 15 bands of ANG's 40th Anniversary Sampler Synchronicity.  In October, 2012, our local Seashore Chapter took this on  as a group project.   I chose colors in the burgundy, Williamsburg blue and tan families.  Plan on hanging it in my home office when done.  Below are pictures of the bands stitched to date.  Note:  I will not be stitching Band 7 as shown in the lessons, but instead will do some research on cut thread patterns and do something more traditional.  Some of the bands need beads which will be added last.  This has been lots of fun to do while being very educational at the same time.

August 5, 2013--Earlier I wrote about my Threads Inventory and Thread Brands databases in the HanDBase app I use.  Today I'll illustrate how I've set up my Projects database, shown in the screen capture below 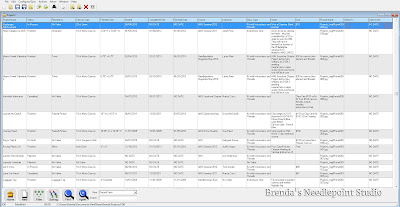 There is a lot of information in this database covering:
I am able to see all of this information on both my PC and iPhone.  The pictures, stored on my iPhone, show up there, but not on my PC.  I believe DDH Software is working on this.   However, I have wonderful files on my PC where I keep pictures of my projects (synced with my phone), scanned instruction manuals, etc.

My favorite sort is by Status....I love seeing all the projects I have finished.  The "Completed" sort shows me what canvases need to be finished (sewn into ornaments, framed, etc.).  My "On Hold" sort is my own personal Hall of Shame.  These are items I've lost interest in or didn't like the instructions (too vague), etc., and will most likely not be completed.  But I am an optimist and may get some of them done one day.  It's also nice to have a record of when a project was given as a gift, to whom and on what date.

I often use the Notes field to track when I've registered and paid for an online course, when it will begin and end, etc.

Below is the form used to enter a new project into the database: 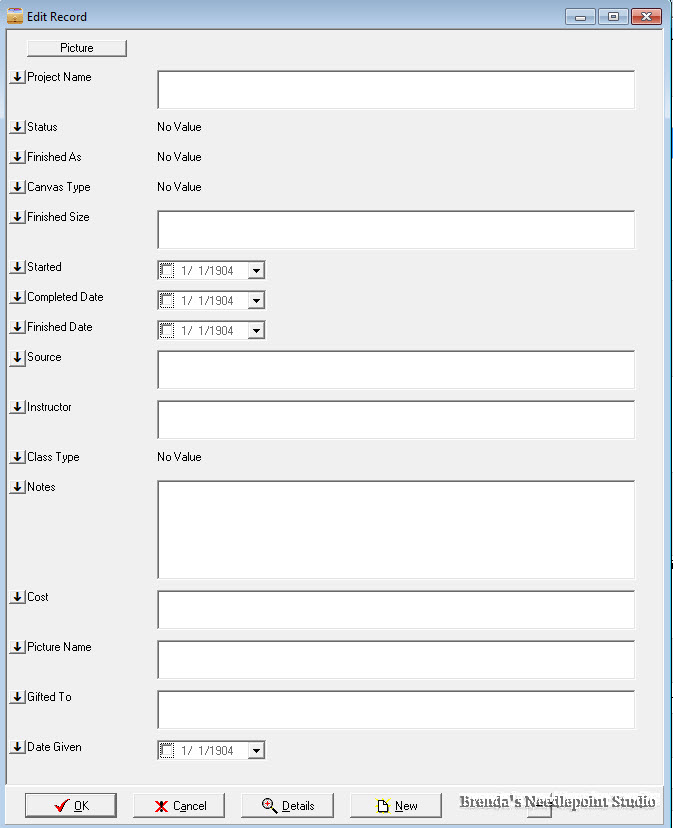 Many of the fields above have "pop up" lists from which to make choices.  For example, when I click on the arrow to the left of Status, the below list pops up: 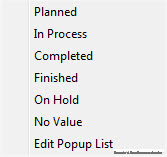 This is so much easier than typing in the status of each project, especially when changing the status, e.g., from Planned to In Process, then to Completed, etc.

Pop Up Lists are a real convenience, but they are limited (to 100 entries, I believe).  So if I have a field that will have a lot of possibilities, I must establish a new database and have the field "point" to it, then from that database, select the record I want.

A perfect example of this is my Instructor field.  Right now I have the names of my favorite instructors in a "Pop Up List", but will soon have too many and will have to establish a separate database called "Instructors".  When that's done, I'll then have the ability to add information about each instructor, such as their email addresses, needlepoint shops with whom they are associated, etc.

That's all of it.  I hope this encourages you to track your needlepoint "assets", be it in an Access type database such as HanDBase, in Excel, on Google's Drive, or Apple's iWork, etc.

When I start a new project, it's such a pleasure to get it listed in my database, then to add the threads to my inventory....it really is a form of "play".