December 7, 2015--Finished these "stars" into two ornaments.  Love how they came out and they are quiet large--5.5" in diameter.  One of these ornaments will be part of my ANG Delaware's Seashore Chapter's Holiday Lunch and Ornament Exchange which is taking place today.  Hope the recipient likes it.   Tried something a little different for my signature on the back's red velvet fabric.  Just initials with the date (done on my Bernina sewing machine).  Like how it came out.

August 31, 2015--Completed all the stitching on the five arms and outlined the star with red Kreinik thread.  I like how the Kreinik seems to hide irregularities in stitch compensation along the diagonal lines.  The green basting thread will assist me in finishing the star as a round ornament.  Instead of adding stitches to the star's background, I'll back the canvas with a shiny white fabric since the canvas itself has opalescent threads running through it (can't see it in the pictures).  I'm very pleased at how well it came out.

August 26, 2015--Moving along nicely--fourth arm completed.  Stitching two of these ornaments at the same time, so it's taking time to do each section.  The compensation stitches aren't easy to do along the diagonal lines of the star and I'm constantly aware of the chance to "over stitch" a pattern.

The project photo (first picture below) shows this as a round ornament with no background stitching.  I'm thinking of doing a light coverage darning pattern using a very shimmery thin thread in the background.  Hmmm....will have to play with that idea.

August 18, 2015--Third arm of the star is completed.  Compensating the stitches along the angle of each arm is a challenge and I may have to outline each arm to cover up discrepancies and other irregularities (LOL).

August 12, 2015--Second arm of this delightful ornament is stitched.  Looking forward to seeing how the colors will look when the third arm is done.

August 7, 2015--The basting and first arm of the star is stitched.  There was lots of basting, but it was necessary to properly line up the inside and outside points of the star.  Also makes a nice guide for compensating.  Susan Jones, however, has written very detailed instructions on where to place the basting stitches and how to compensate the complicated stitches in each star arm, so very little has to be decided upon.  Easy, peasy :-).

August 4, 2015--Started stitching Susan Jones Star Crossed ornament.  This project is from the July/August issue of Needlepoint Now magazine and the challenge of variations and compensation stitches is right up my ally.  Below is a project photo.  In process pictures will be posted as each arm of the star is stitched.

Posted by Brenda M. Cote at 11:00 AM No comments: Links to this post

Road Trip to the Needlearts 2015

November 15, 2015--I just returned from a wonderful weekend of stitching and camaraderie at the 20th Annual Road Trip to the Needlearts Retreat sponsored by SSP (Stitching Sisters Presents). 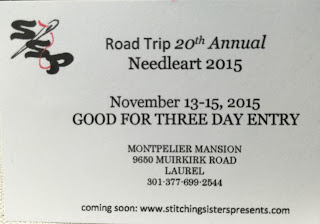 The three "sisters", pictured below from left to right, are 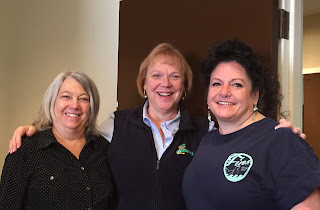 I had the good fortune of sitting with these terrific ladies as well as (from left to right), Patty Yergey, Needlework Designer of Samplers Revisited, Patricia Eaton with In Stitches and Wanda Kellum. 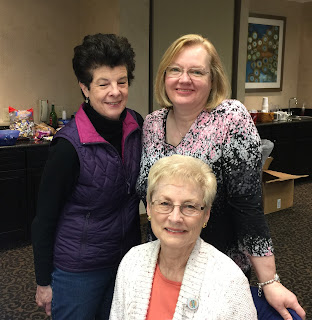 We wanted for nothing all weekend.  The hotel was very comfortable and the stitching lounge was airy, spacious and well lit.  We were fetted with a reception on Friday and a catered dinner on Saturday.   The three "sisters" also had a boutique open with all types of needlework goodies to purchase.   And the stitching--so many beautiful projects being worked on by all of the participants.  The weekend also included a trip to see the Needlework Exhibit at Montpelier Mansion.

The coordinators are thinking about holding the next retreat in March, 2017 to coincide with the Woodlawn Needlework Exhibit in Alexandria, VA.  Looking forward to that one!
Posted by Brenda M. Cote at 6:00 AM 1 comment: Links to this post

October 22, 2015--Finally finished stitching this delightful santa.  There's lots of dimension on this santa as can be seen in the second picture (but the beads aren't showing).  Will eventually have this santa and others made into ornaments.  How adorable they'll look on my tree.


July 29, 2015--Along with the hat, all of santa's hair is stitched--beard, mustache, sideburns and eyebrows.  The last thing to do is the fur on the hat.  The beard is very shiny and had to take a side view so the beads would be visible.


May 11, 2015--Signed up to take this class from the Shining Needle Society in December, 2014 and am just now able to work on it.   Only the face has been stitched, but it's nice to see santa "come alive".  Love these Janet Zickler Casey santas--they are fast to stitch and Janet's instructions are so easy to follow.

Posted by Brenda M. Cote at 9:40 AM No comments: Links to this post


October 20, 2015--Finished this beautiful project and will now shop for a box with an insert top.   Enjoyed seeing how easy the blackwork stitches were to execute.

October 7, 2015--My local ANG chapter, Delaware's Seashore Chapter, was fortunate to have Ann Strite-Kurz teach us a class called Beachcomber's Booty.  It's a beautiful sand dollar design (it's our chapter's logo).

Below is a picture of my project so far.  It's fun to work these beautiful stitches and I hope to have it done this month.

There's a story behind this.  Linda,  another chapter member, and I took a class from Ann at the 2012 Philadelphia ANG Seminar.  While there, Ann told us about her beach house in Rehoboth Beach, DE.  We asked Ann if she would be willing to teach a class when in Delaware and shared contact information.  Well, earlier this year she wrote to say she would be here in October and asked if we were still interested in having her teach a class.  We answered with a resounding yes, yes, yes!

Ann brought some examples of her pieces along with anything we wanted to purchase (saving us lots of shipping costs).  We drooled over her techniques and marveled at the results.

Thank you Ann for a wonderful learning experience and we'll have a beautiful project when done.

September 10, 2015--I like needlepointing in the car and found it difficult to have tools at my fingertips.  Attaching them with magnets to a metal board worked well, but then had to insert the whole board into a bag to keep the items from detaching themselves when put away.

Then I found these delightful Namaste magnetic cases.  I purchased two in the eggplant color--one large for traveling, the other to keep the "smalls" in one place while in my happy chair at home.  The large one is perfect.  I'm able to place many tools in the bottom section of the case and keep my needles nicely organized and protected under the flap in the top portion.

PS  The needle guide attached to the insert of the large case is from The Needle Index, 1996 Valley Quail Chapter, EGA Walnut Creek, CA

It's a beautiful venue for displaying needlework and I'm looking forward to this year's exhibit.


November 24, 2014--Recently visited the Montpelier Mansion in Laurel, MD to see their 19th Annual Needle Art Exhibit which runs from November 1 through November 30, 2014.   I was joined by a co-member of the ANG Delaware's Seashore Chapter and we were amazed at the number of beautiful samplers displayed, but dismayed at the very few needlepoint pieces (less than 5 from what we could tell).   The samplers, however, were so wonderful that I'm seriously considering doing one.  A trip to In Stitches in Alexandria, VA is in order.

Fortunately we met the organizer for this event and she told us that needlepoint exhibits are most certainly welcomed and was pleased to learn that our Delaware chapter members would be very interested in exhibiting our pieces at Montpelier next year.  The entry fee is $5 per item and there is no limit to how many pieces you can exhibit.   I for one love the venue.


Posted by Brenda M. Cote at 8:55 AM No comments: Links to this post

August 19, 2015--Stitched the border on the second set of coasters--a gingham pattern in black.  Love how well the technique is working.  The below pictures show front and back of two coasters.  Next step--stitching the cute pumpkins.

Yesterday I began to stitch the outline of one of the designs and discovered early on that I had to increase the magnification of my glasses.  Doing so made a tremendous difference in the quality of my stitches.  The technique learned is a challenge, requiring full attention to each stitch.  Catherine's instructions, however, are wonderful and she even included a password to access a special online, very, very helpful, video to see how the stitches were done.

I also had to zigzag the edges to keep the fabric from unraveling.  Why zigzag using red thread?  It's what was on my sewing machine and I was too lazy (lol) to change the thread.

The whole idea of the technique I'm learning is for the cross stitches to look the same on the front and back.  I've somewhat succeeded with doing this, but hiding beginning and ending threads is still a bit of a challenge for me.  The idea is to NOT have the tails showing under the cross stitches on either side.   Getting there.

July 13, 2015--Have completed the stitching on this piece and am ready to finish it into a stocking.   The side view picture shows the depth and nap of the threads.

Think I'll make the cording out of the two greens and add white.  Love working on projects that take no time to complete.  It's just what I needed.


July 11, 2015--Finished the cuff on this beautiful stocking.  Changed the color of the Kreinik cross stitches from gold to a pale green.  Hope it'll work.  Here's a photo of my progress so far.


July 6, 2015--My local ANG chapter, Delaware's Seashore Chapter, is stitching Pat Mazu's Delicate Flower Stocking from the 2003-2004 Chapter Project Book.  I've got everything together and ready for the class today.  The threads chosen are from my stash and even though not the traditional holiday colors, I think they'll be lovely (I love all greens with a touch of blue in them).

This is the first post in over a month--was fishing with DH in Canada and thoroughly enjoyed it.  I love being on the water and DH makes fishing so easy for me--he baits my hook and takes the fish off the hook.  All I have to do is reel it in, and that's where all the fun is.  The lakes were so beautiful.

Posted by Brenda M. Cote at 7:35 AM No comments: Links to this post

June 2, 2015--I love these dressed up paper clips and want to thank Funk & Weber Designs for their fun tutorial.

I did take the liberty, however, to make a few changes and/or additions as noted in the instructions below: 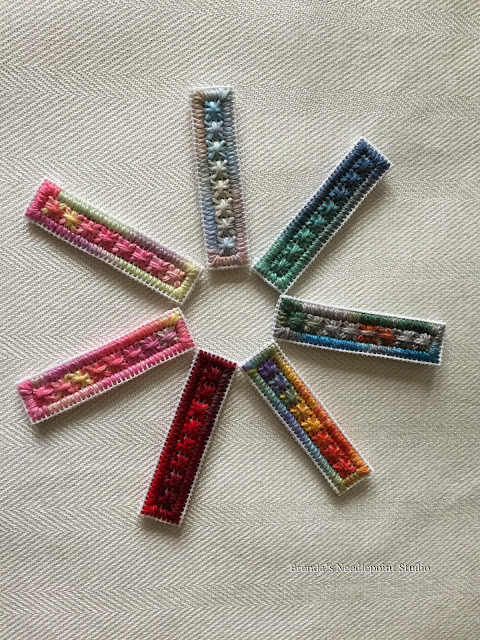 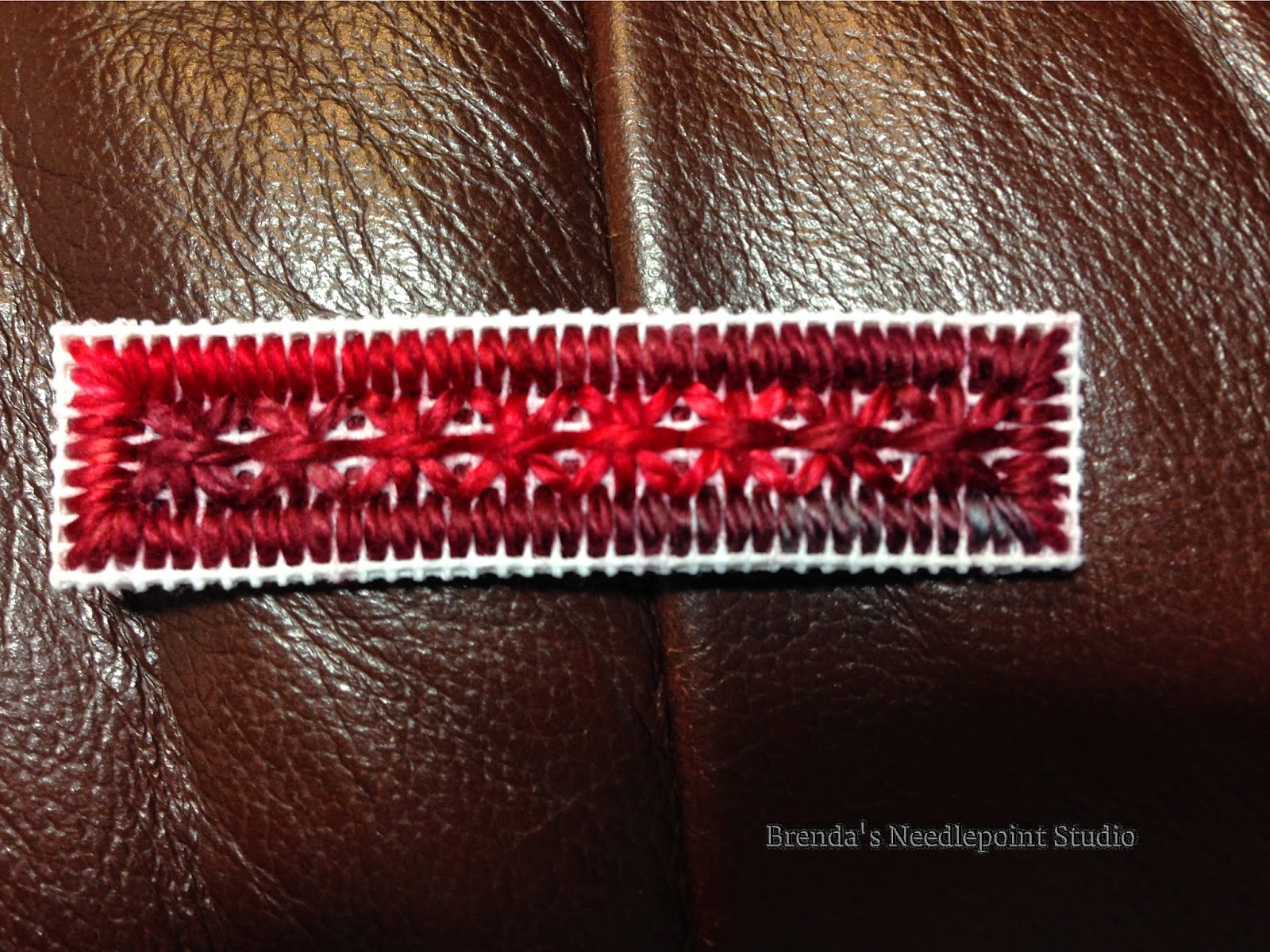 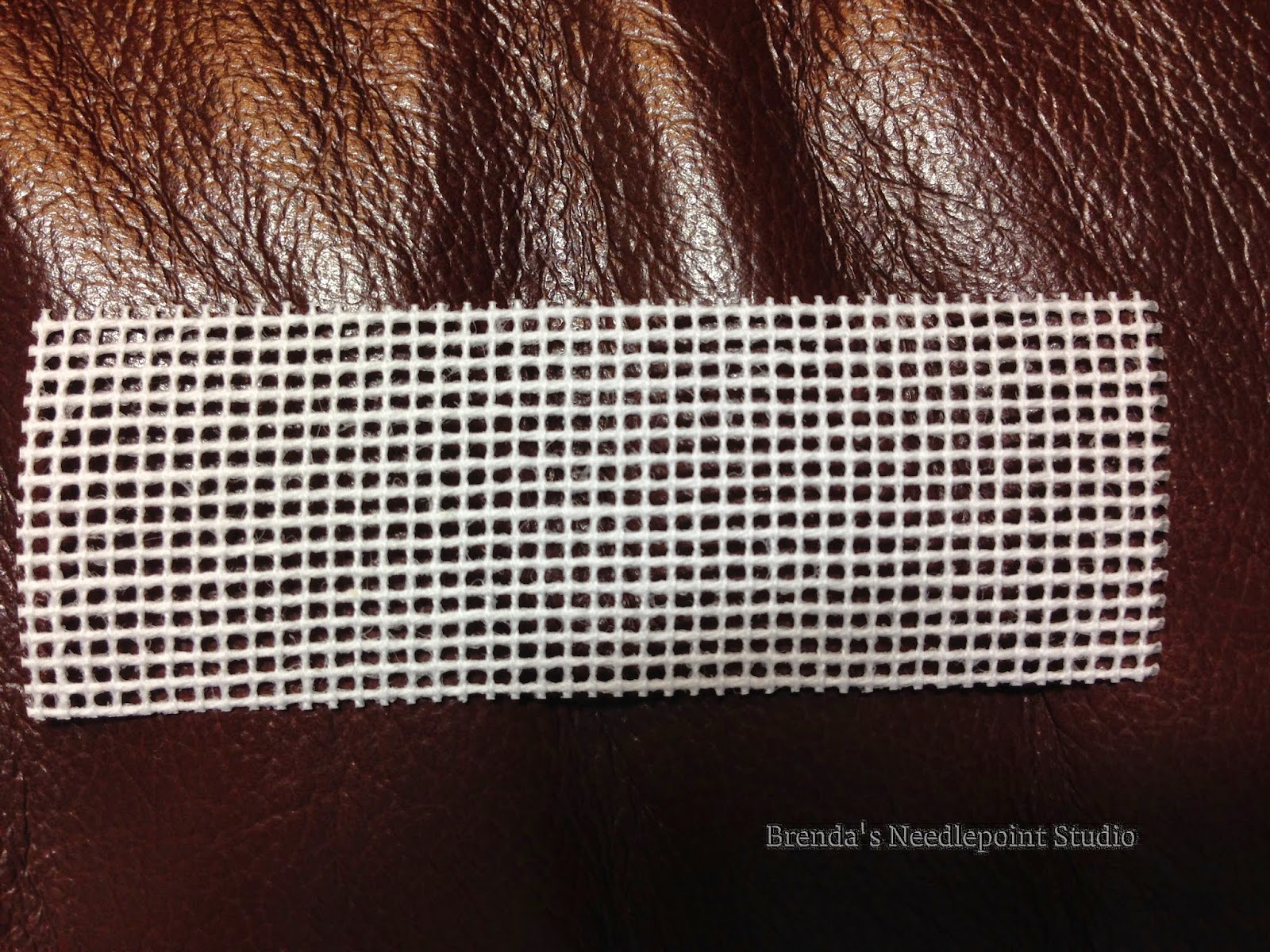 2.  Stitch 8 smyrna crosses beginning 6 threads up and over from the left (you will have 6 blank threads on the top, bottom, left and right sides of the smyrna crosses. 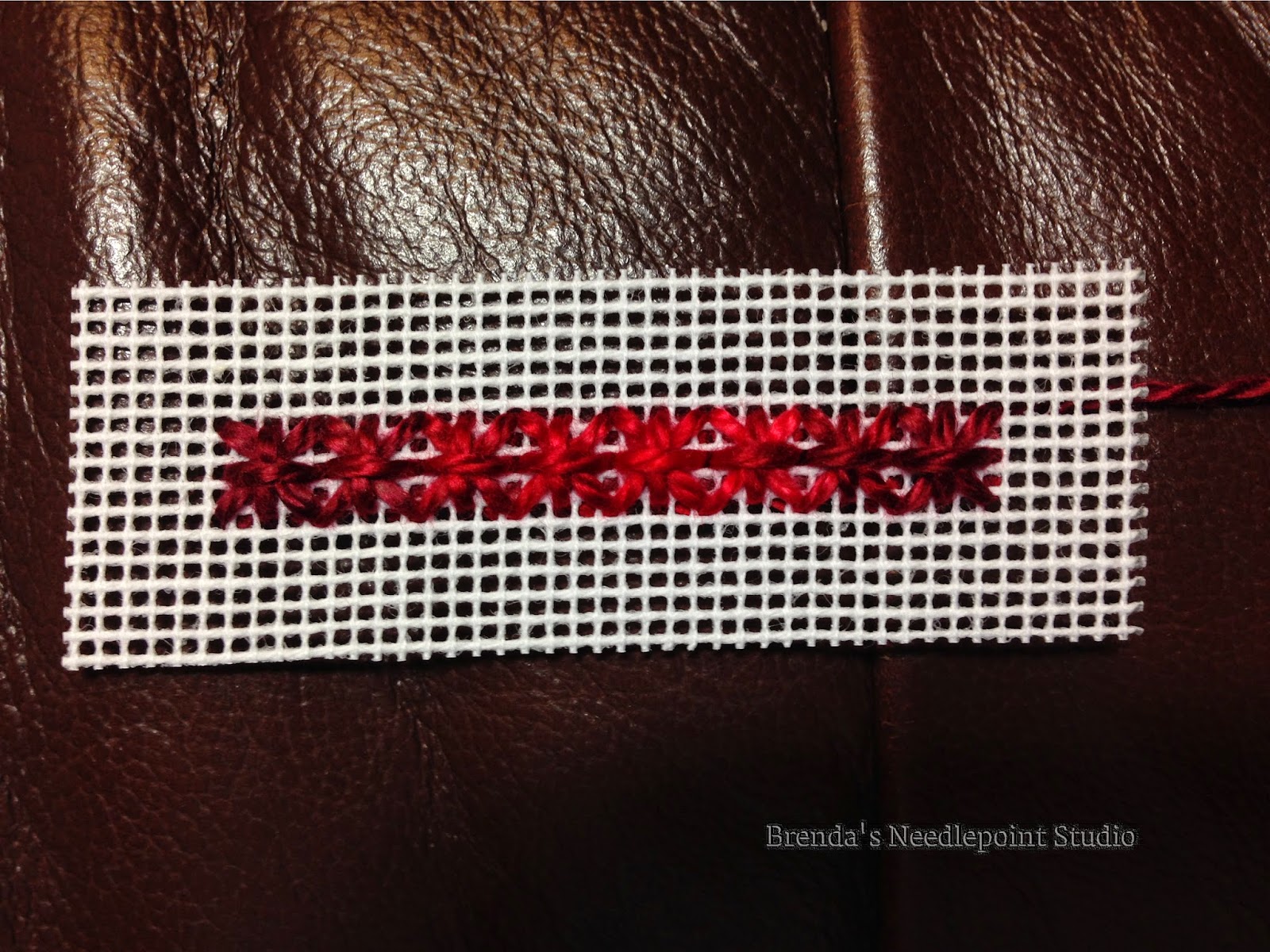 3.  Fold each canvas edge at the third thread on all sides.  The pictures below show how the fold is made (front and back) and the pin "marks the spot". 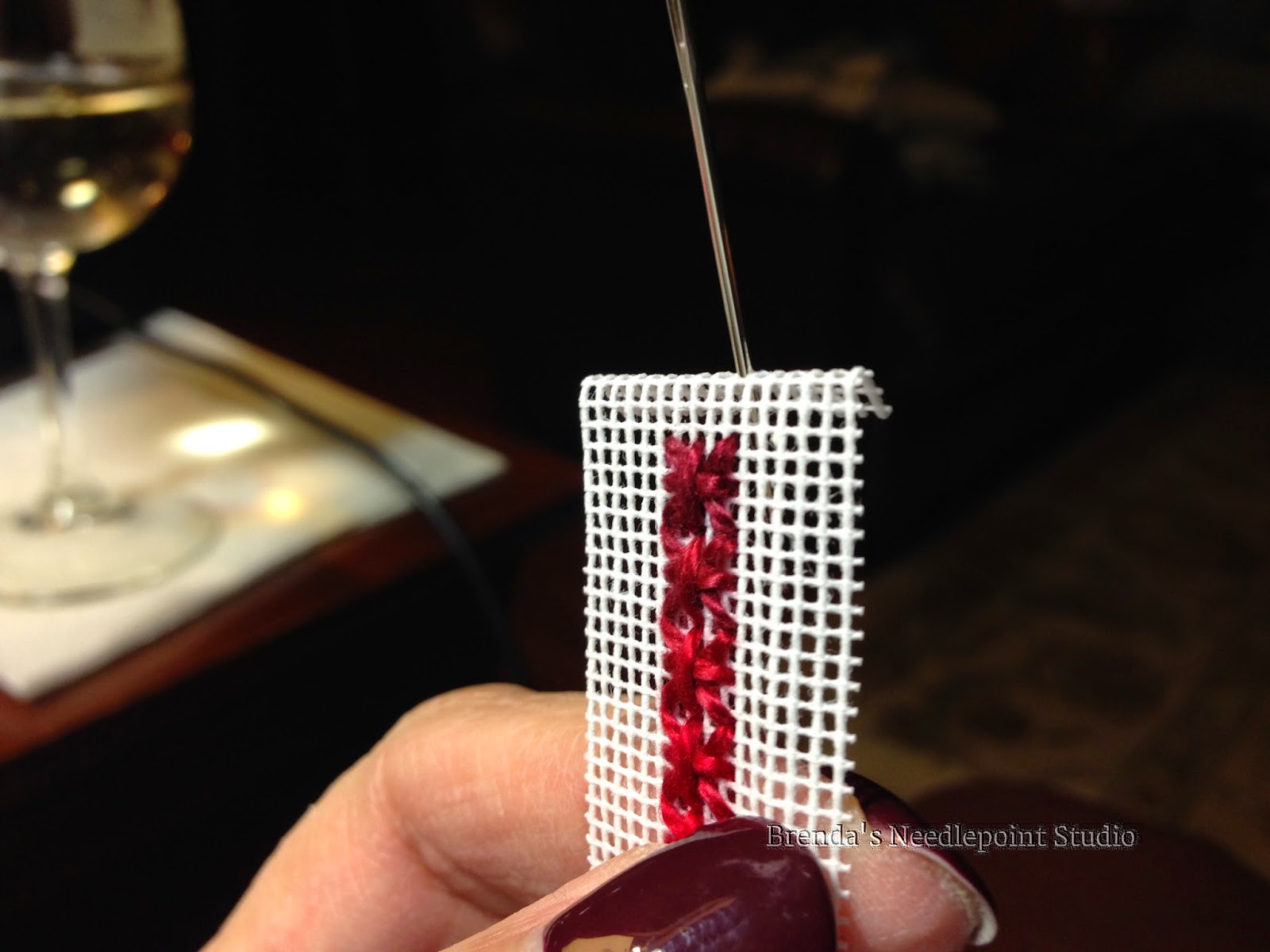 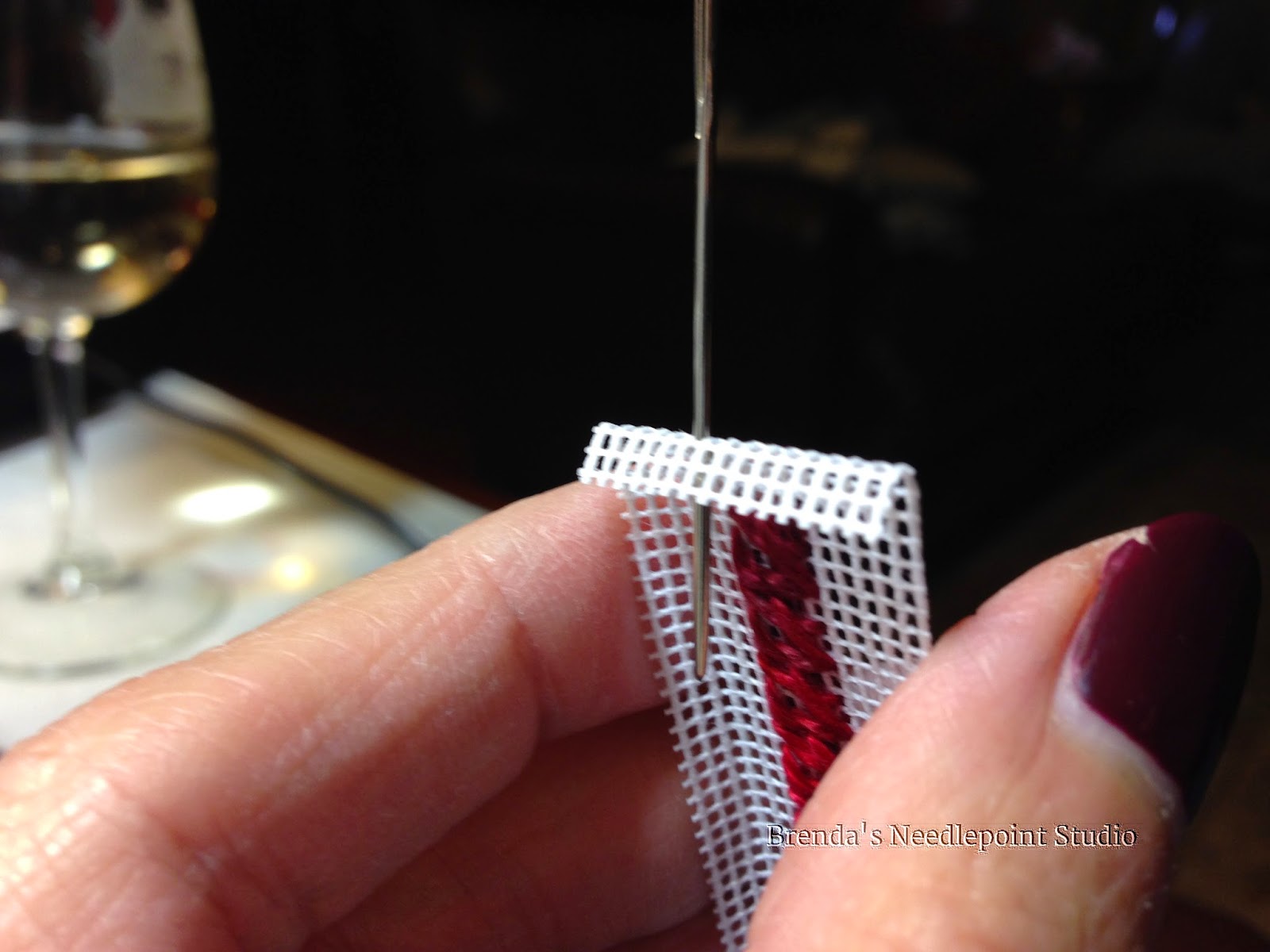 Step 4.  Satin stitch over 2 threads (leaving far edge thread unstitched on all sides) around the smyrna crosses, being sure to cover the long sides of the paper clip.  Pictures below show front and back of the covered paper clip.  Be sure to leave the rounded edge on the short side of the paper clip unattached as shown. 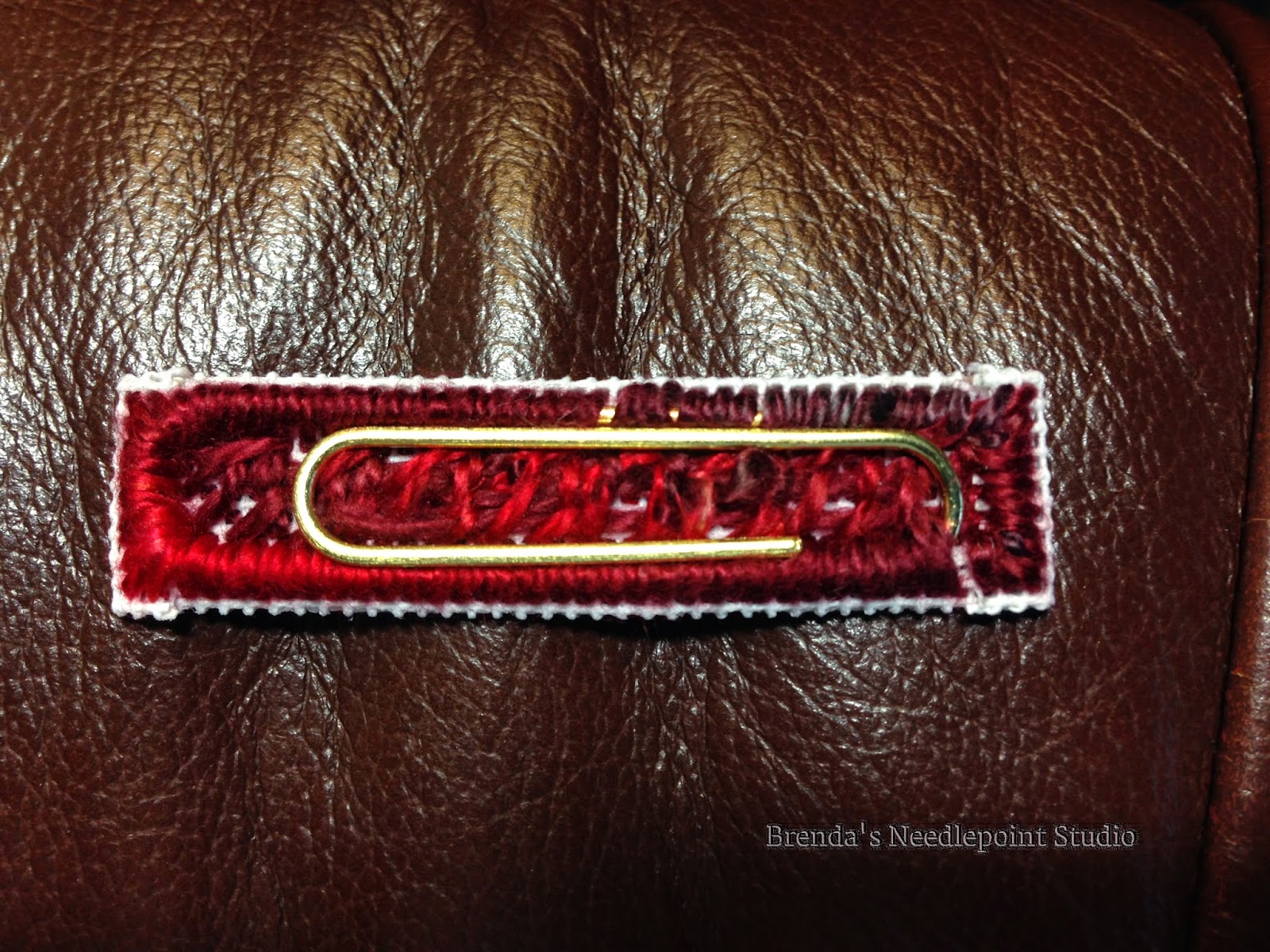 I now want to play with dressing up the edges, possibly add a raised stem stitch, etc.