April 22, 2015--San Antonio is now framed and I love how the dark blue mat draws your attention to the needlepoint. 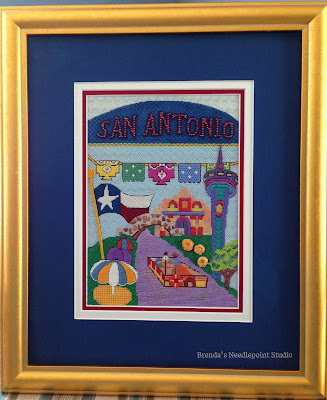 March 28, 2015--Done stitching and ready for the framer.  This will look great in my craft/sewing room and will be a delightful reminder of the wonderful trips I've made to San Antonio.  BTW, this is the second of the three ANG chapter challenges to have done by December, 2015.

March 21, 2015--Rounding the corner to the finish line.  The tree and yellow roses are done and am currently stitching the lacy sky.

February 24, 2015--River is done.  It was stitched with two strands of DMC Satin Floss made of 100% rayon fibers using long and short random stitches.  Because it is such a slippery thread, I cut longer strands and doubled it once it was passed through the needle.  This made it very manageable. I like the results.  The canvas had various colors reflecting the gondola and tree painted in the river. This now shows a little through the stitching.  I like it.

February 18, 2015--Accomplished a bit more stitching on this project--completed the tower and gondola.  I like how the "life ring" came out.  As suggested by Sundance Designs who wrote the stitch guide, I found a perfectly sized stainless steel washer to cover with perle (or I should say my DH found it for me).  Now to stitch the river, tree and large yellow silk ribbon flowers.  The beautiful lacy pattern for the sky will be done last.

February 1, 2015--More progress.  The Alamo and umbrellas and table are stitched.  The tower looks like it'll be fun to work on.

January 21, 2015--Moving along nicely on this project.  The grassy areas and the large lone star heart flag are now stitched.  Next posting--the Alamo.

January 4, 2015--This is the second of three projects I'm stitching as part of my ANG chapter's 2015 challenge to complete three WIPs by December, 2015.

I'm making a little bit of progress beyond what I wrote about in 2013 (old blog is below), having stitched the papal picado-paper banners (will do the black outlining later) and stitched the grass using the Medieval Mosaic stitch.  I found it very difficult to maintain the pattern of this stitch around the umbrellas so I did something desperate--I basted the full pattern in place, through the umbrellas, to where the pattern would be continued (see picture below).  Now I can see where I need to place the needle without any counting whatsoever.  Wanting to get the design perfect on a canvas like this may be a bit annal, but that's how I roll (insert smiley face here).


July 25, 2013--Completed stitching the sign and love how the beads look like little light bulbs.  The instructions called for stitching the beads using the "brick" method, but due to the narrow width of the spaces upon which to place the beads, the results have a more random effect.  The lattice work was stitched with an overdyed navy blue causing the sign to look a little weather beaten--like it.

These beads and many others were given to me by my mother's housemate.  She crafts beaded jewelry and her son is always on the lookout for bead sources at flea markets, etc.  On one of those shopping expeditions, he purchased a box of generic glass beads, all in vials, of many different colors. However, the beads were too small for jewelry making purposes, so I was the happy recipient of this box. The beads come in multiple sizes in each vial, so I must sort them prior to stitching to find the size I want.  But I'm not complaining, and the variety of sizes can look good on the same project.  The beads I used for the San Antonio sign were red with a yellow glaze. 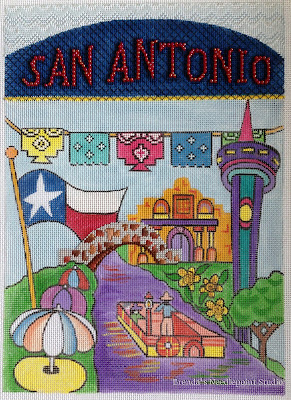 July 18, 2013--While at the 2011 ANG Seminar in San Antonio, TX, I purchased the below canvas as a souvenir of my visit.  Actually, I've visited San Antonio many times and thought this piece would make a nice momento.  So far I've stitched the bridge and a portion of the blue over the sign.  I only pull this out when I need to relax and take a break from all of the counted stitch projects I do.   This canvas and its accompanying stitch guide is an exclusive design created for the Yarn Barn in San Antonio by Sundance Designs, Tucson, AZ. March 24, 2015--I have now made available, for FREE, to owners of DDH Software's HanDBase app, the databases or “applets” that I developed to manage my thread inventory, needlepoint projects, etc.

To use these databases, you must first own DDH Software’s HanDBase app.   I have written about these databases in prior blogs (see below for links to these posts) and have since received many requests to make them available. So here they are and if you’re interested, go to the DDH Software Gallery page.

Scroll down to Keyword Search and type in the word "needlepoint".  You will then see the six applets and their download links.  The databases are:

Once downloaded and saved to your HanDBase Database File, you can open each applet and begin entering your own data.

My blog postings titled HanDBase Projects and HanDBase Threads Inventory will have lots of information on how I use these databases:

Please feel free to ask questions and have fun personalizing these databases with your own records.

PS  I have no financial interest in DDH Software--am just a very satisfied customer.

After a delightful lunch in the Underwood Room operated by Nelly's Needlers, we leisurely strolled through the many rooms displaying the most wonderful needlework.  This year I entered five pieces, being the first time I've exhibited at Woodlawn, and was greatly surprised and pleased to learn that I won the following ribbons:

All in all it was a fun day with the requisite stop at In Stitches located less than a mile from the exhibit.  Lots of goodies to tempt you.


December 31, 2014--Here is my last completion for 2014.  Love these little pandas and think they'll look adorable in my home office on a bookshelf.  Envisioning a black lacquer frame, or maybe inserting this piece into a box top.   I must admit, even though I'm not used to painted canvases and chose the stitches myself, am very pleased with the background stitch called "Little Wavy Stitch" found in my iStitches v3 app.   The use of the brick stitch for the white fur--well I'm not so sure about that.

In the original post about this canvas (below), I wrote about how it was purchased for my DGD.  Well as things go, she has gotten involved in many other activities and lost interest in needlepoint, so I stitched it myself.  Hopefully she'll pick up a needle again some day and when she does, I'll be glad to help her.

PS:  There is no designer's name on the canvas except for the number G-674.  Does anyone know what that means?

August 10, 2013--Visiting family in Ohio and at the recommendation of another ANG Yahoo Group List member, my DGD and I spent a delightful hour or so at A Stitch Above Needlepoint in Madeira (Cincinnati).  We were given wonderful assistance by the proprietor to find something suitable for a beginning stitcher. Then she helped me decide on which colorway to chose for an upcoming project by pulling threads for both colorways and letting me decide which one I preferred.  She is an angel!

DGD settled on a wonderful painted canvas panda with only 7 colors and using perle cotton (no laying tool required).  Hope we have lots of stitching time tomorrow to cover some details on how to properly execute the basketweave stitch.  She understands the diagonal direction the stitch takes and recognizes when she makes an error, but hasn't yet grasped the zig-zag pattern flow of moving from one "row" to another.  Until then, playdates come first and she's off being an 8 year old girl and all the fun that entails. 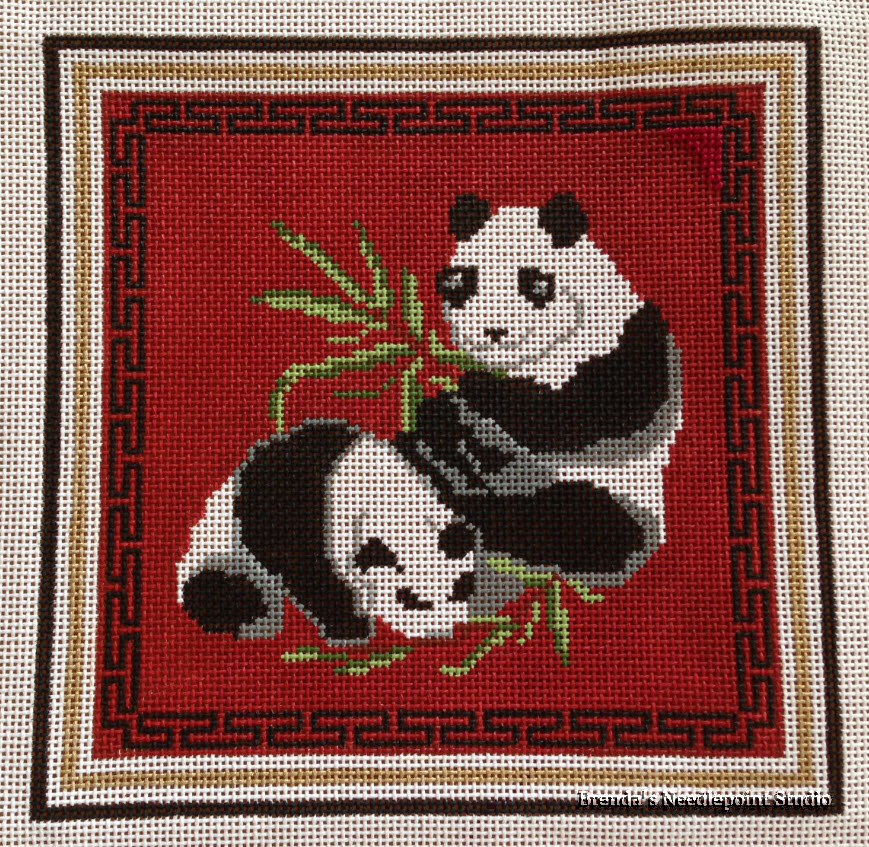 March 11, 2015--Completed the stitching of this little piece and will now finish it by turning it into a "candy kiss".  I decided to bead the lips instead of using a tent stitch--like how they came out.

March 7, 2015--My local ANG chapter, Delaware's Seashore Chapter, is stitching Kisses by Barbara Bergsten Designs, led by one of our talented stitchers at the March meeting.   There were so many to choose from and I decided to work on the one called "Kiss".   They are all so adorable and very easy to stitch.  When sewn together, it will be shaped like a Hershey Candy Kiss.  Here's mine so far: