January 21, 2014--Finished all lessons and Santa looks very jolly with those light bulbs on his hat.  As another stitcher had done, I too purchased smaller "bulbs" than those included in the kit.  Found them at Michaels and was told this is an item they carry all year in their buttons group.  At my store in Rehoboth Beach, DE, they were located near the jewelry making supplies.  First finish for 2014.  Yay!

I used dark red thread to attach the beads.  Since I like stitching beads on canvas over two threads, the white nymo was showing.  The red thread can be seen, but only if looking from the top or bottom.  Looking forward to Lesson 4.

December 25. 2013--Lesson 2 is done.   Santa's coming alive now that his beard and most of his hat are done.  This is such a delightful project to work on.  But must admit, had a hard time stitching the beard so that the drawn lines on the canvas wouldn't show.  Had to "punch" into adjacent stitching to cover the lines.  Succeeded for the most part.    Since it'll take a another week to get santa finished, I want to wish everyone a very Merry Christmas and a Happy New Year filled with lots of fun stitching.

PS--back stitched over the top of santa's cheeks to hide the canvas black line which was showing .  Worked nicely.

December 21, 2013--Lesson 1 done.  Noticed that I didn't properly stitch over the drawn lines of the cheeks, so the line is showing.  Wonder if some backstitching on both cheeks (using the same color thread as in the cheeks) would work?

November 6, 2013--I love Janet Zickler Casey's santas and am excited to take the new online class from Shining Needle Society (SNS) beginning December 9th called Christmas Light Santa.  This santa is identified as the 17th in the series.   I understand SNS will be offering some of Janet's older santas and I'll certainly collect them as they are made available.  The only other santa I have so far is Candy Cane Santa.

January 15, 2014--Not doing much stitching these days.  Traveled to Canada for their Ice Wine Festival in the Niagara Falls area (that was a blast) and celebrated a wedding anniversary.  Life is good.


Did, however, manage to complete one of the segments of the Stitches for Effect class I started last October and am half way through the second.  Also nearly finished two other projects from online classes.

Then I volunteered to pilot stitch a project due in April about which I cannot blog, so I'll be silent on that front.

Lots of work in progress and will have more to write about soon.

Happy stitching.
Posted by Brenda M. Côté at 8:35 AM No comments:

January 2, 2014--The information packet with application form for the 4th Annual Rehoboth Beach Museum Needlework Exhibit is now on their website.

This is a fun exhibit to participate in as well as visit.  And a great excuse for Rehoboth Beach vacationers to arrive early in 2014 to catch this event. 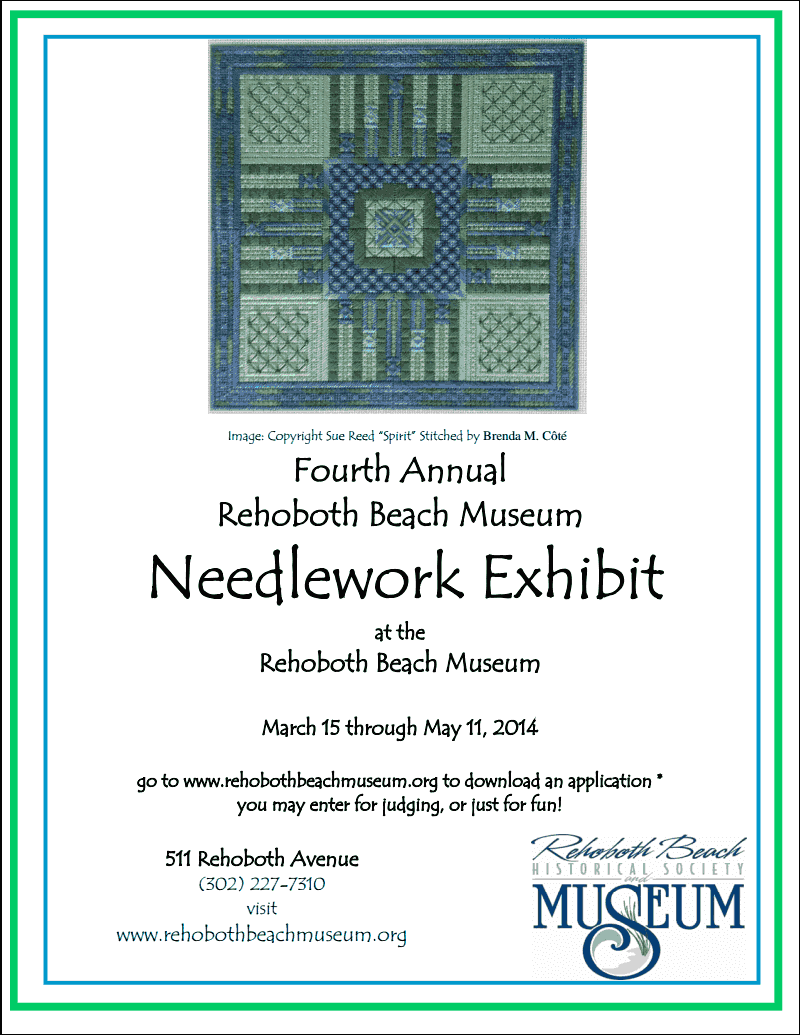 November 19, 2013--The Rehoboth Beach Museum is announcing its 4th Annual Needlework Exhibit in Rehoboth Beach, Delaware from March 15 to May 11, 2014.  I was so happy to see that Spirit by Sue Reed was chosen for their marketing piece (picture above) and Sue Reed was kind enough to approve the use of this project for their flyer.